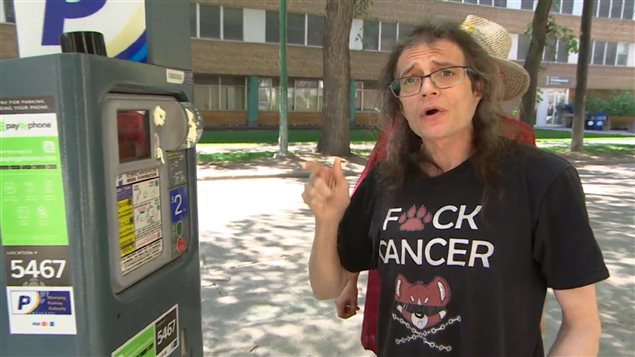 Cancer patient Collin Kennedy was so angry about parking fees that he filled a meter at his clinic with foam.
Photo Credit: CBC

A cancer patient who is angry about the high cost of parking at his clinic has been offered help to pay for it. But that doesn’t make the underlying problem go away.

In 2011, the journal which represents Canadian doctors published an editorial urging hospitals to abolish parking fees calling them a barrier to health care. The public broadcaster has also highlighted the problem in two of its programs.

On the radio program White Coat, Black Art, Dr. Brian Goldman said fees can discourage patients from seeking medical attention and discourage people from visiting sick friends and relatives in hospital. A CBC Marketplace report found many Canadians are missing hospital appointments and experiencing added stress due to the costs of parking at their local health centres.

Cancer patient Collin Kennedy, who lives in the western city of Winnipeg, estimates he has spent about $15,000 in parking fees since his diagnosis about 17 years ago. He said the fees are standing between him and his treatments. On May 30, he sprayed foam into a meter near the CancerCare Manitoba clinic.

Police visited him and warned him to not do it again, but said they would not charge him. After a video of his act of protest was posted on social media he received many messages of support and a local businessman offered to pay his parking fees and help with education costs for his son.

Kennedy is grateful for that and the fact that the issue is getting so much attention.