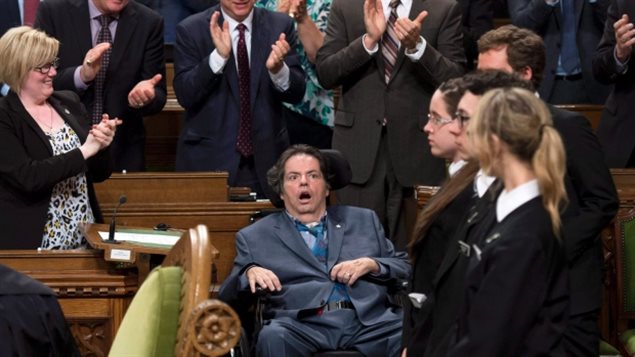 Mauril Belanger receives a standing ovation during a vote on his private member's bill to make the national anthem more gender neutral in the House of Commons on Wednesday.
Photo Credit: CP Photo / Justin Tank

It now appears all but certain that Canada will soon have a revised, gender- neutral national anthem–a legacy to the perseverance and passion of a dying MP who has long championed the change.

As Mauril Belanger, a Liberal MP from the Ottawa area, watched from his wheelchair, the House of Commons on Wednesday overwhelmingly passed the third and final reading of his private member’s bill by a vote of 225 to 74.

The bill would change the second line of the anthem from “true patriot love, in all thy sons command” to “in all of us command.”

Following the vote, MPs rose to sing the anthem before according Belanger a standing ovation.

It was his 61st birthday.

Last fall, he was diagnosed with Amyotrophic Lateral Sclerosis, also known as Lou Gehrig’s Disease, and his condition is deteriorating.

The bill won support from most Liberals and the New Democrats, but most Conservatives opposed it, believing any change should be made the broad consent of Canadians.

However, a number of Tory MP’s, including Gerry Ritz, Peter Kent, Michelle Rempel and Candice Bergen voted to support the legislation.

The bill now goes to the Senate for passage.

Conservative Senator Nancy Ruth, the bill’s sponsor in the Upper Chamber, told CBC News she believes the legislation has enough support to pass, but it’s unclear whether that can happen before the Senate rises for the summer.

That means Belanger might not live to see it pass.