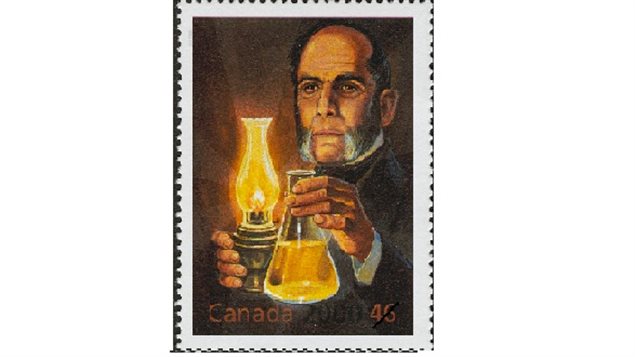 Canada Post stamp issued to commemorate Abraham Gesner considered the father of the modern petroleum industry. A 46 cent stamp was issued in 2000 as part of the ’milenium series’
Photo Credit: Canada Post

History: June 27, 1854-The Canadian inventor who saved the whales

Some 160 years ago, whales were being actively slaughtered by the thousands in the quest for things like their baleen, used in women’s garments, and for things like fishing rods, umbrella stays, buggy whips, etc. but especially sought after was their “oil”.  Around 1850, there were over 700 whaling ships in  the US alone.

The blubber would be boiled down to be used mostly as lamp fuel, but also for machinery lubrication, and in soaps, paints and varnish manufacture, processing of textiles and rope and more.

Especially sought was “spermacetic” found in the head of sperm whales only. When exposed to air, it congealed and was used to make ‘smokeless’ candles, considered the highest quality of candle.

Whale bones were ground up as fertilizer, and whale meat was often sold to Asian buyers.

Had this continued, most species of whales would be extinct by now, but for Abraham Gesner.

Born in Nova Scotia, he originally was interested in geology, but became a medical doctor.

While practicing medicine he continued his geological interests and experiments with ‘hydrocarbons’.

Using pitch, he devised a method to distill different qualities of oil including a paraffin-like product  which burned evenly giving off a good light.  Using the Greek words for wax and oil, he came up with words which he simplified into “kerosene”.

While ‘coal-gas’ was known in lighting, it was expensive, whereas, Gesner’s new product, kerosene, was vastly less expensive than either coal-gas or whale oil, and far easier to produce.

In 1850, he used his product to light homes and streets in Halifax.

A company was set up and kerosene began being marketed as a far cheaper and better alternative lighting fuel.

However, unbeknownst to Gesner, a similar product from a coal-like substance had been created by a Scots chemist who had obtained an American patent in 1852 and an ensuing patent lawsuit saw Gesner required to pay a royalty to the Scot.

In 1859 there was sudden growth of oil discoveries and refining in Canada and the U.S. Gesner’s process was easily converted from pitch and bitumen as primary sources, and replaced with crude oil making kerosene production even cheaper.

The result of cheap and efficient kerosene meant a rapid decline in the whaling fleet and wholesale slaughter of the huge mammals. In twenty years the whaling fleet had been reduced from the hundreds to less than 40 in the US by 1876.

While whaling did not and still has not completely died out, notably in countries like Japan, Russia, and Norway, Gesner’s invention can certainly be said to have saved whales from outright extinction.

However, Gesner himself did not profit greatly, and was replaced as chemist at the ‘Kerosene Company”.

He returned to Nova Scotia in 1863, where he was appointed  professor of Natural History at Dalhousie University, but died a year later on April 29, 1864.

Although kerosene had and has many other uses and is still used for light in undeveloped regions, as a lighting source it too began to be replaced in the late 1800s as the electric light bulb became more common.