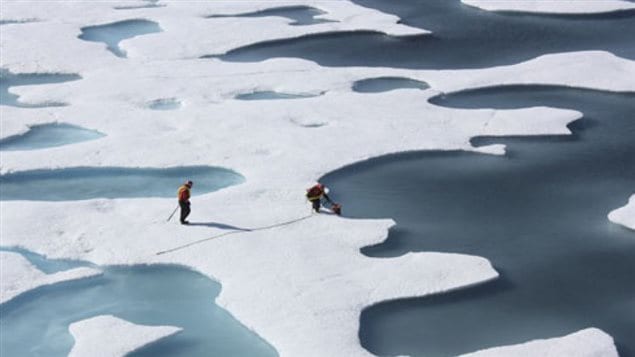 New data released for the month of June show record lows for ice extent for the Arctic. Scientists will not predict record lows for the year, but with new record lows set for April, May and now June, it seems very possible.
Photo Credit: REUTERS/Kathryn Hansen/NASA

New record for sea-ice loss in the Arctic

The latest data shows that Arctic sea-ice has retreated again for the month of June, to reach the lowest extent for that month since satellite records began in 1979.   So far low sea-ice records have been set for every month this year except March.

The data for June was released by The U.S.-based National Snow and Ice Data Center which reported that Arctic sea ice averaged about 10.6 million square kilometres for the month.

Quoted by News Deeply, Christian Haas, an Arctic sea ice geophysicist at York University, Toronto, says, “In 30 years, the area has shrunk approximately by half. There doesn’t seem to be anything able to stop this trend,

The melt seems to be due to unusual weather patterns over the Arctic.  In Kugluktuk, Nunavut on June 5th, the temperature was 29.2 degrees Celsius. A month later the warm spell continued with a temperature of 27 degrees on July 6th, a new record for the date. Normally the temperature in July in western Nunavut varies between 8 and 15 degrees.

Scientists note that as highly reflective sea ice melts, it exposes more of the dark ocean which absorbs the sun’s heat, thereby warming the sea and air and contributing to even greater ice melt.

The ice extent was some 260,000 sq.km below the level in June 201 was had been the previous record low for the month of June.

The U.S.-based National Snow and Ice Data Centre said that from mid-June onwards the ice loss in the Arctic was an average of  74,000 sq.km. a day which was about 70 per cent faster than typical seasonal loss.

Meanwhile the retreating ice is making the area more attractive to large ships.

Concern is being raised about the prospect of commercial fishing in the central Arctic’s international waters and a recent meeting of several Arctic states and observers has been working out an agreement to ban commercial fishing until more is known about the fish populations and ecosystems.

Another concern is that of large cruise ships passing through Arctic waters.  The “Crystal Serenity” will sail from Alaska in August to traverse the Passage with some 1,000 passengers aboard.  The Canadian Coast Guard says more such voyages are likely to follow, along with a number of “thrill seeking” boaters as the Arctic waters remain ice-free for longer periods.

“And so that introduces a whole new level of risk of traffic in the Arctic, people taking risks in the Arctic, and increases the need for the presence of our vessels and our team here”, says Canadian Coast Guard Commissioner Jody Thomas.