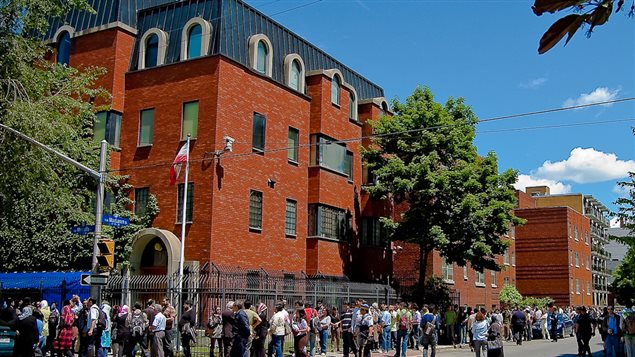 The Iranian Canadian Congress (ICC) is urging the Canadian government to re-establish diplomatic ties with the Iranian government. The ICC used the first anniversary of the nuclear agreement with Iran, to issue the plea.

Bijan Ahmadi, president of the ICC, says the decision by the previous conservative government of Stephen Harper, to close the embassy in Tehran and cut diplomatic ties in the fall of 2012 was wrong.

He says Iranian-Canadians have paid the price in the challenges they face, from having to go to Washington to renew passports, to the inability to bring pressure to bear in the case of Iranian-Canadians imprisoned in their native country, as is the current case with academic Homa Hoodfar.

Despite the sanctions having been lifted in the wake of last year’s nuclear agreement, many Iranians are still having problems with financial services. Ahmadi cites a recent complaint from someone whose mortgage application for a condo unit was initially approved, but when it became evident the down payment was coming from Iran, the Canadian bank denied the mortgage. Ahmadi says they are still investigating, but urges the banks to update their sanction rules.

Canada’s Minister of Global Affairs, Stephane Dion, says the government of Canada, and Prime Minister Justin Trudeau, are interested and have expressed the intention to re-engage with Iran. But it will take place on a “step by step basis”.

One of the hurdles is the former Conservative government’s law, known as the, Justice for Victims of Terrorism Act. It allows victims of terrorism to sue countries for sponsoring it. There are several suits pending against Iran since the Conservatives included it, on the list of states that sponsor of terrorism.

The new Liberal government will have to navigate public opinion and the diplomatic channels to get to the point of opening a new embassy in Tehran, even though there are those who say Canada is losing out on major business opportunties in the country of 80 million people, and the fourth-largest oil producer in the world.

Canada’s former embassy in Tehran, was in the international spotlight in 1980, when Ken Taylor, the ambassador at the time, sheltered the six Americans who had escaped the hostage-taking during the Iranian revolution,

In the meantime, Iranians wanting to visit friends or family in Canada, will have to continue making the trip to Turkey to get the required visa, and official relations will continue between Canada and Iran, with the help of Italian diplomatic officials in Tehran.