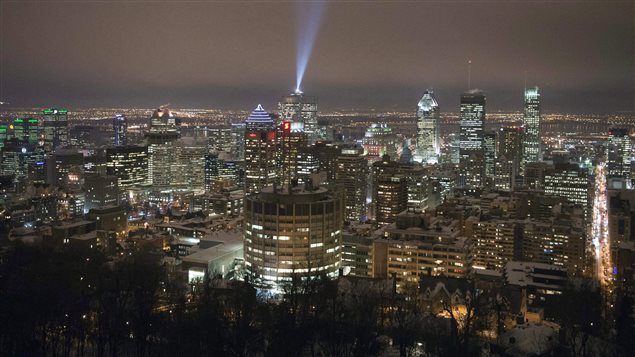 A view of the Montreal skylilne from the mounatin. The mainly French-speaking city is the location of the Polyglot Symposium of North America underway this weekend..
Photo Credit: CP / Ryan Remiorz

The Polyglot Symposium underway in Montreal this weekend is the first for Georges Awaad. The 17 year-old just graduated high school and with a facility in 16 languages, he is looking forward to a career in diplomacy.

Already his gift for languages has opened doors. In the equivalent of grade 9, he entered his school’s Mandarin Chinese language competition, and won! The victory sent him to China, where he met 76 other winners from as many countries. He says most of them are still connected through social media, and he relishes the opportunity to communicate in the different native tongues for practice.

Georges Awaad says he’s looking forward to the opportunity at this symposium, to meet people he has only communicated with online. He’s also keen to attend a session on “Raising Multilingual Children”. He himself is one. He grew up speaking French, started speaking English in kindergarten at the age of 5, and then at 12, he was eager to learn the language of his Arabic heritage. He began learning to write the language with his grandparents.

“I have a connection to languages with the heart and not with the brain”, Awaad says, professing his passion as his absolute favourite hobby. His father took note of the talent and suggested his son use Google to develop it.

Now he is comfortable in languages such as Japanese, Turkish, Dutch, Armenian, Spanish and Mandarin. He says Mandarin is his favourite because he loves the musical sound of it, and learning to write it, led to a deeper understanding of the history and culture through the pictogram, symbolic letters.

While this symposium may be his first, it is easy to imagine, that George Awaad, the young man entering Quebec’s college system, it won’t be his last.