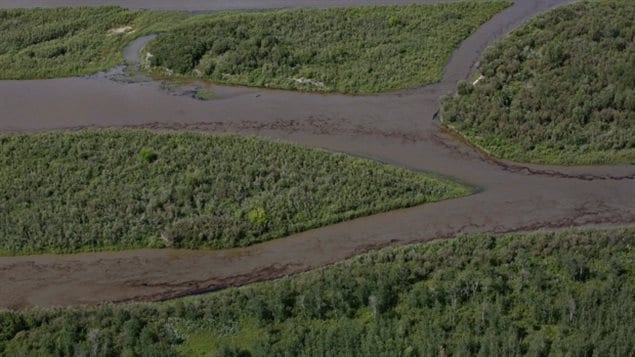 The North Saskatchewan River, where up to 250,000 litres of oil and chemicals were spilled earlier this month from a Husky Energy pipeline, has turned a dark grey as officials battle to keep potable water flowing to cities and towns in the region.
Photo Credit: CP Photo / Jason Franson

Two weeks after an oil spill played havoc with the lives of some 70,000 people in northern Saskatchewan, the province’s auditor has some troubling words about preparations aimed at avoiding such calamities.

In an interview with the CBC, Judy Ferguson says the province has implemented just two of seven recommendations her office made in 2012 to improve pipeline safety.

“In that industry, there’s a set of standards that are set by Canada. So we use those as our bench mark or our criteria,” she said. “And we found significant gaps compared to the criteria.”

Ferguson added that the cleanup of the Husky oil spill that dumped 250,000 litres of crude into the North Saskatchewan River earlier this month must be done “appropriately in a timely fashion.”

Earlier this week water began to flow through temporary pipelines to cities and towns in the province’s north.

But officials in Prince Albert, North Battleford and Melfort must now figure out how to access clean, potable water if the river remains contaminated when winter arrives in three months.

Prince Albert’s city manager, Jim Toye, says options being discussed in the wake of the Husky Energy spill include installing facilities to remove hydrocarbons from water drawn from the North Saskatchewan River to make river water contaminated with oil suitable for drinking.

Meanwhile, Premier Brad Wall, visiting North Battleford on Wednesday, said testing is underway to ensure that a report done by Husky Energy on samples from the North Saskatchewan River is accurate.