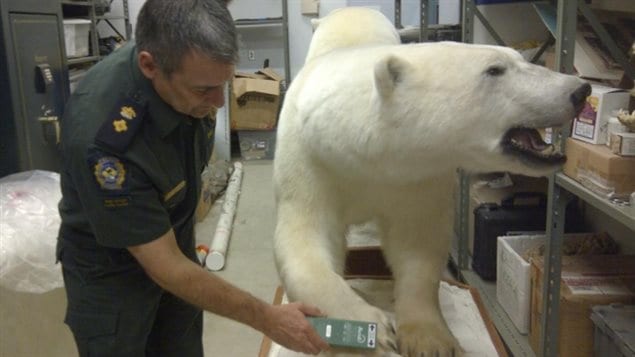 A wildlife officer scans information from a microchip embedded in a polar bear hide.
Photo Credit: Submitted by Environment and Climate Change Canada

As part of a Canadian pilot project, microchips are being inserted into polar bear hides in a bid to stop the illegal trafficking of the animal, reports the public broadcaster, CBC. The aim is also to protect Canada’s reputation as a place that carefully manages sustainable hunts.

Canada has several populations of polar bear, some of which are doing well enough to support limited hunting.

Tracking where bear hides came from

Conservation officers in parts of the northern territory of Nunavut and Labrador in eastern Canada started using microchips plus DNA samples to track where bears were hunted. Testing showed the chips stayed in the hides even after they were tanned and mounted.

The information contained in them would inform buyers and wildlife enforcement officers as to where the bear was hunted. That would also help in the management of hunting.

Wildlife trafficking has increased dramatically over the past decade, according to a Canadian Interpol official. Between 2009 and 2013 polar bear pelts quadrupled in value.

Conservation officers say the microchip experiment has been a big success and will be expanded it to communities in the northern territories of Yukon and Northwester Territories this fall. They believe microchips could be used in a similar way to help protect wildlife in other parts of the world.