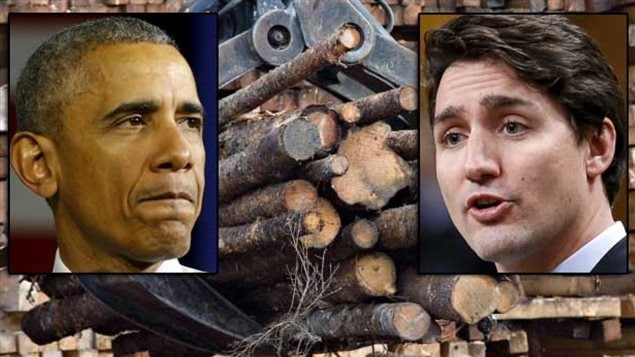 As an October deadline approaches, Canada and the U.S. continue to grapple with a trade dispute that sometimes seems like its been going on forever.

Despite being the world’s largest partners, an agreement on softwood lumber continues to elude both sides, raising serious questions about trade, sovereignty and the real nature of Canada-U.S. relations,

The heart of the dispute is the U.S. claim that the Canadian lumber industry is unfairly subsidized by Canadian governments.

The dispute turned ugly in the 1980s when the U.S. slapped billions of dollars of fines on Canadian wood, costing thousands of Canadian jobs, including nearly 10,000 in British Columbia.

The agreement, which expired in Oct., 2015 and extended a year was the source of a tense exchange between Prime Minister Justin Trudeau and U.S. President Barack Obama during the North American leaders’ summit in Ottawa in June.

On Thursday, Canada’s chief negotiator in the talks, Martin Moen, told a parliamentary committee that reaching a deal by a fall deadline will be a challenge, though he noted that negotiations continue at a “intensive pace.”

Moen warned that if an agreement is not reached by Oct. 15, Canada could be forced into litigation because American producers will be allowed to impose new duties.

The next meeting between the two sides is scheduled for next week.

With files from CBC and CP.