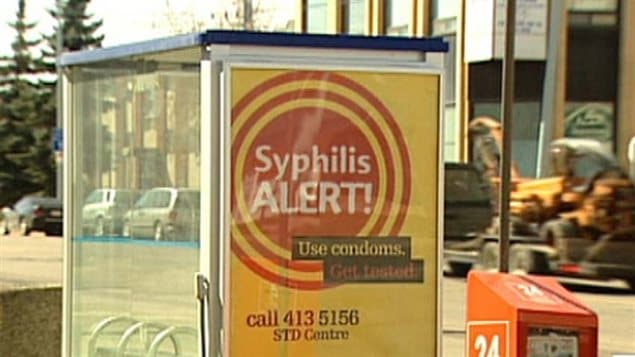 A 2015 bus stop poster in Alberta promotes use of condoms and urges people to get tested for syphillis. STD rates in Canada had declined markedly in the 1990s but have been climbing back up ever since.
Photo Credit: CBC

Every year millions are treated for sexually transmitted diseases and infections (STD- STI), but every year it’s becoming more difficult to cure them.

That’s because the various strains are becoming more and more resistant to antibiotics.

Health officials say continued misuse and overuse of antibiotics, including for urinary tract infections, is leading to resistance build-up in the STD’s.

The United Nations via the World Health Organization, has updated its guidelines for gonorrhea, chlamydia, and syphilis. It’s to ensure doctors prescribe the best antibiotics at the right doses to treat each type of disease.

Right now, gonorrhea resistance is a major concern, but officials are also worried that resistance is building in syphilis and chlamydia.

Teodora Wi, is a medical officer in the WHO’s department of reproductive health and research. She said in 2006 there were five recommended treatments for gonorrhea, but now four have become mostly ineffective due to resistance.

The WHO estimates that every year over 130 million people are infected with chlamydia, 78 million with gonorrhoea, and 5.6 million with syphilis.