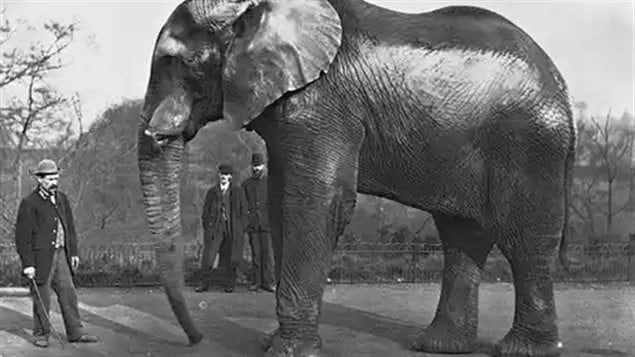 Jumbo and *trainer* Matthew Scott. Note lack of tusks. Out of stress and occasional bouts of violent behaviour in his cage, the tusks were worn down or broken off. He was often beaten into submission, not a happy life.
Photo Credit: Getty Images

In fact in the English language his name has come to mean anything big from jumbo jets,  to jumbo shrimp..to, well anything big.

Jumbo the elephant, one of the world’s most famous animals, was killed in a train accident on September 15, 1885 in St Thomas Ontario.

At the time, Jumbo was the star attraction marvelling the crowds at PT Barnum’s circus as it travelled around North America in the early 1880’s

Jumbo was captured as a youngster after watching his mother being slaughtered by Arab tribesmen in Africa’s (then) French Sudan or possibly Eritrea, for her tusks and hide. The calf was sold first to a small zoo in Germany, then to a Paris Zoo, and in 1865, to the London zoo.

It was the London zookeeper association which later gave the large animal his name, possibly either from the Swahili word “jambo” for hello, or “jumbe” meaning chief, although the actual origin is not known.

In London, the elephant was hugely popular, giving rides to adults children and generally appearing quite docile, but as he reached sexual maturity, he became more difficult to control.

The American promoter PT Barnum came along and bought him in 1881 for today’s equivalent of roughly $250,000. Although there was a huge outcry from the British public they weren’t aware that the London zoo was thinking of shooting Jumbo if he couldn’t be sold because of the increasing difficulty of controlling the large male.

Barnum figured out a way however: keep him sloshed.

Lots of wine and whisky was used and fortunately it acted like a tranquilizer rather than turn him into a mad drunk.

Barnum very quickly recouped his money in displaying the enormous elephant to enthralled crowds as the star attraction at Madison Square Garden in New York City and as the circus travelled around North America and through Barnum’s legendary hype and showmanship Jumbo quickly gained mass recognition, the equivalent of going viral today.

But then, the world was shocked and saddened to learn of Jumbo’s untimely death on September 15, 1885 following a show in St Thomas, Ontario.

After the elephants and other animals had completed their act in the western Ontario city, most had already been led to their special railway cars, but Jumbo, the biggest, and Tom Thumb, the smallest, were last, having taken the show’s final applause.

A level crossing was nearby, but the circus had received special permission to take down some fencing to enable a shorter route for the animals along the track to get to and from the circus grounds and their parked train.

As the two elephants were walking along the second set of tracks to their cars, an express train #151 came along the parallel track. The show was supposed to end after the train had passed, but instead it had ended about a half hour earlier, and the animals were caught.

The keeper tried to first get the elephants to go down the small embankment to safety, but they wouldn’t, so he hurried them towards the nearby level crossing where they could get off the main line. But, it was too late.

The train was unable to stop in time and hit Tom Thumb, knocking him aside and down the embankment with a broken leg. The seven-ton Jumbo, (possibly partly drunk and unwilling to run) was caught on the tracks between the parked train and the embankment. He was hit from behind derailing the locomotive and pushing him head first into a parked rail car.  Mortally wounded with a crushed skull, Jumbo died a few minutes later comforted by Matthew Scott his weeping keeper.

In his book author Sutherland alleges that the death was not an accident, but that Jumbo has some mysterious wasting disease, and rather than be faced with a slow death Barnum and/or Scott staged the situation leading to the accident.

Thus, came the end of the world’s most famous elephant…sort of.

Barnum, ever the promoter, had other plans.

Faced with the loss of his leading attraction, Barnum had the hide removed and placed over a stuffed frame, and for the next few years was able to display the stuffed animal. The skeleton was preserved separately creating two attractions to be displayed which continued to bring in money from the curious.

Then in 1889, Jumbo’s stuffed hide was donated to Tufts University in where it was on display until destroyed (all but the tail) in a fire in 1975.