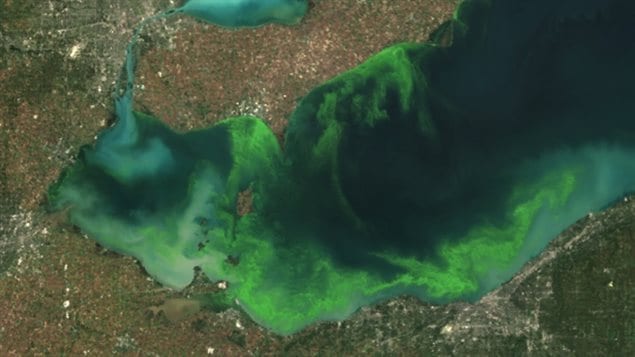 Satellite image of algae bloom on Lake Erie 2011. According to NOAA it was fed by phosphorus mainly from farm fertilizer runoff and sewage treatment plants, leaving behind toxins that have contributed to oxygen-deprived dead zones where fish can’t survive. The toxins can kill animals and sicken humans. In August 2014 Ohio’s fourth-largest city, Toledo, told residents not to drink from its water supply fouled by toxins possibly from algae on Lake Erie
Photo Credit: NOAA/Associated Press

This is the fourth in the five part series on the growing concern over access to fresh water.

Today, how farming practices and the growth of giant factory farms, have changed resulting in increased damage to water supplies caused by algae.

Although it deals generally with the situation in Canada, it explains how and why the subjects touched upon are interconnected world-wide.

The small farms were always concerned about the land, and generally had small animal herds which grazed over a large area. Now factory farms cram thousands of animals into that same land and the effluent  leaches into ground water and streams and rivers.

These nutrients promote the growth of the toxic algae.

Another issue is the giant factory crop farms, again the concern is profit, not stewardship of the land. Massive amounts of fertilizer are used, and the excess runoff also promotes the growth of toxic algae.

In some places, multinational corporations and even governments are buying up vast tracts of land (land grab) so the products and or water can be exported with no local benefit.

Ms Barlow points out a little known phenomenon of “virtual water” that is the moisture contained within the plants and animals exported out of the watershed never to be returned.

All of this means more and more fresh water is becoming more costly to treat, if it can be treated at all. And once again, water availability is being reduced, even as the demand continues to grow.