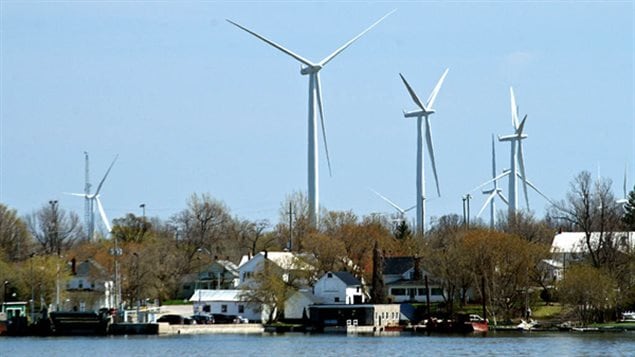 View of some of the dozens of turbines on Wolfe Island, Kingston Ontario. Ontario halted a proposed 100 turbine added development in 2011, and under NAFTA Chapter 11, Canadian taxpayers will have to pay $28 million dollar penalty, and the project may not proceed regardless
Photo Credit: via South Shore Conservancey

(note: comment submission form is located at the bottom of each story on the site)

It is another example of what those opposed to international trade deals have been saying about the ability of sovereign governments to enact domestic policy decisions in regard to environmental and social protection, and other decisions.

Ontario taxpayers will now be on the hook for over $28-million penalty to Windstream Energy LLC, a company owned by New York investors. This comes as a result of a challenge under the North American Free Trade Deal (NAFTA).

“This is another outrageous example of taxpayers having to fund foreign corporations who do not respect the democratic rights of governments to regulate in the interests of their citizens. This is another reason to reject ISDS in NAFTA and other trade deals such as CETA” Maude Barlow, Council of Canadians

The dispute stems from a decision by the Ontario government in 2011 to place a moratorium on offshore wind turbines. This frustrated a $5.2 billion contract in 2010 with Windstream to erect 100 turbines offshore near Kingston Ontario in a 300MW project signed with the Ontario Power Authority.

An arbitration tribunal launched under the auspices of NAFTA’s Chapter 11 dispute mechanism decided in favour of Windstream Energy LLC, and against Canada. Although the moratorium was a provincial decision, under NAFTA, it is the federal government which is held responsible. The award, $25,182,900 was for damages, and a further $2,912,432 was for legal costs. It is the largest penalty to date against Canada under the free trade agreement.

The free trade tribunal also ruled that the contract is formally “in force”.

Reaction to decision- for and against

In a press release Windstream director David Mars said, “This award is an appropriate first step at remedying the challenges we have faced. We look forward to working with the Government of Ontario to build this project in accordance with the contract.”

In reaction to the decision, the citizen’s advocacy group, Council of Canadians said today, “Here’s just another example of the outrageous nature of investor state dispute settlement provisions, the chapter 11 in NAFTA.  Here it is: targeting Ontario green energy policies which encourage local economic development.  This is the same thing that we will be getting with the new deals Canada’s promoting CETA and the TPP. We in Canada are the most sued country in the developed world, over NAFTA.  It begs the question: why are we signing up for more punishment?”