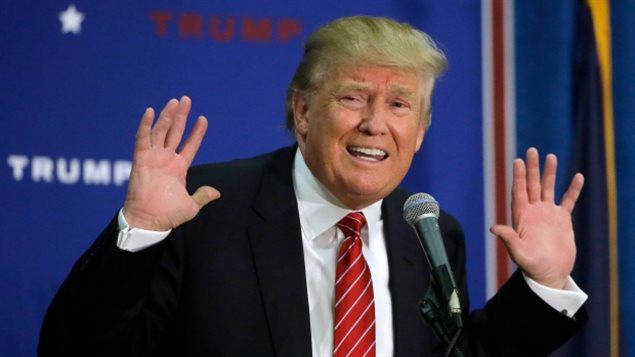 Donald Trump is the President-elect of the United States. Some now think his fiery and controversial rhetoric of the campaign will be toned down and he may become more pragmatic. But international trade deals were a major issue and thier future is uncertain.
Photo Credit: Steven Senne/The Associated Press

During his campaign U.S. President-elect Donald Trump has repeatedly said he would either scrap or renegotiate international trade deals. This includes deals like the long-standing North American Free Trade Agreement among Canada, the U.S., and Mexico, and the Trans-Pacific Partnership (TPP)

Given the integration of business and international trade, could such deals be so easily scrapped? What are the implications?

Professor Van Harten says President-elect Trump, has the ability to scrap NAFTA with six-months notice, as does Canada or Mexico.

Canada is the United States biggest trading partner and the economic implications of scrapping the deal are enormous. Van Harten says that major companies in the US would likely strenuously object and they would have a lot of influence on the new government.

Van Harten says it is more likely that the Trump government will seek to renegotiate the deal.

However he says that it is unclear whether Trump would go further and try to renegotiate the Canada-U.S. free trade deal, or simply focus on NAFTA because it involves Mexico, and on the Trans-Pacific Partnership which he may just let die.

Professor Van Harten adds that President-elect Trump’s position on international trade deals may give impetus to those who are opposed to such deals as the Canada-EU deal known as CETA which has yet to be ratified by the many countries of the EU. As for the similar deal the EU and US have been working on known as TTIP, that has seen great opposition in Europe and is even more likely to fail now given the probable lack of support to come from the incoming administration and European dismay about Trump.

Professor Van Harten stressed that there are legitimate concerns about these trade deals and that those committed to free trade should not be putting it at risk by adding new and provocative elements on foreign investor rights, for example.

The Osgood Hall professor also points out that Trump will have to follow through on some of his strong pronouncements regarding issues like trade or risk alienating supporters who saw him as being different from the status quo type of politicians. On the other hand, political realities may force him to soften certain positions. Van Harten hastens to point out however that it is still far too early to draw conclusions as to what the future may hold.