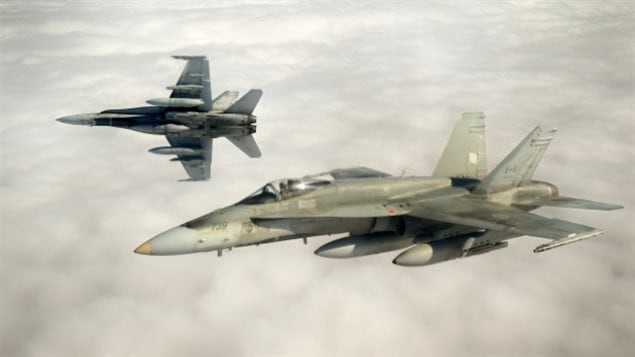 Canada’s Boeing CF-18 Hornets are nearing the end of their service life. The issue of replacements continues to be a political hot potato for the Liberal government, as it was for the preceding Conservatives
Photo Credit: via CBC

The incoming Liberal government said it would not go with the F-35 and seemed to be leaning toward buying the new generation of F-18’s (Super hornet) as a replacement. As with the controversial Conservative position, the Liberals indicated it would be a sole-source purchase.

Faced with stiff opposition from the aerospace industry and political opponents, the Liberals backed down on the sole-source idea this summer and industry experts then believed the government would move towards an open bidding process.

Now however it looks like the move to sole-source the replacement and go with the Super Hornet may be back on the table. However, that option might see only about 20 airframes purchased as a politically expedient way to silence critics of sole-source contracts, and as a way to delay the replacement need for the full fleet of fighter jets.

According to PostMedia, there may also be some disagreement between politicians and the military on the fighter situation.  A story in the Ottawa Citizen says the Defence Minister, Harjit Sajjan says a replacement for the current CF 18’s is needed now, while air force officials apparently are saying they can extend the current Hornets to 2025.

After initially backing down from the sole source replacement idea in June, the government in July put out requests for information on potential replacements.

Five firms replied: Lockheed Martin on the F-35A, Dassault (France) on the Rafale,  Eurofighter proposed the Typhoon, Saab Group proposed the Gripen, and Boeing provided data on the Super Hornet.

The F-35 caused huge controversy in Canada due to a sole source acquisition decision, and especially due to ballooning costs of development alone.

In addition, the F-35 became even more controversial due to many developmental problems and delays.   It has since been declared ready for combat by the US military, though some in the industry say the plane still needs more development.  according to the Citizen article.

Defence Minister Sajjan says a fighter decision would be made shortly, which is interpreted as meaning possibly by the end of the year.

However, given the financial amounts at play, legal action by one or another of the potential bidders may follow any decision as evidenced by the controversial situation in Denmark where the F-35 was chosen over the Super Hornet and the Eurofighter.