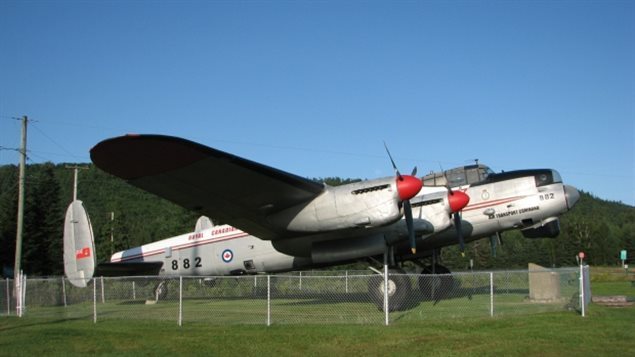 KB-882 in its postwar reconnaissance livery parked at Edmundston, New Brunswick. Although it looks OK from a distance, decades of exposure have taken a very serious toll. Still, it is one of the very last restorable examples in the world. After many failed efforts to save it, the historic veteran now seems finally to have been handed over to capable hands.
Photo Credit: City of Edmundston

It is one of last, if not the very last, restorable Lancaster bombers in the world..

The Lancaster is one of the most iconic aircraft of the Second World War. As for KB-882, it is not only an actual war veteran, but was one of the hundreds of “Lancs” built in Canada.

A deal has now been struck to have the aircraft ownership transferred from the town of Edmundston New Brunswick and the plane moved to the National Air Force Museum in Trenton, Ontario.

Chris Colton is the executive director of the museum.

KB-882, after the wartime service in Europe, was flown back to Canada and mothballed for several years. It was then taken back into service in the Cold War as a surveillance aircraft, also performing mapping duties.

Time and technological advances caught up with the veteran by the mid 1960’s and it was flown to Edmundston where the city wanted it as a war memorial.

In airworthy condition, it was parked outside beside the airstrip, and then left…decade after decade.

Time and souvenir hunters took their toll and it was declared a few years ago that if something wasn’t done, this historic aircraft would simply collapse into a pile of aluminium rubble.

On again, off again

Realizing the situation, a group in Edmundston wanted to restore and house the heritage plane, but the funds just weren’t there and that effort fizzled.

Then a qualified museum in Alberta said they’d take it over, but the costs, including moving it across the country, also proved prohibitive, and they had to abandon their plans, leaving the Lancaster still sitting in the elements in New Brunswick.

A millionaire warplane collector from Australia, said the dilly-dallying in Canada meant the plane would be lost, and he had the funds and desire to save the plane in Australia. That too went nowhere.

One last winter in the cold

Now at last the National Air Force Museum, located at Trenton Ontario beside a major Canadian military airbase, will take over the plane and the restoration project.

Colton says, a specialized military recovery team along with experienced aircraft restoration individuals, will travel to New Brunswick to assess the situation and then perhaps in June 2017, the historic plane will be disassembled for transport to Trenton.

Although KB-882 will never roar into the skies again, Colton says the plans are to have the plane fully restored to its postwar reconnaissance role by April 2024 for display purposes on the 100th anniversary of the Royal Canadian Air Force.