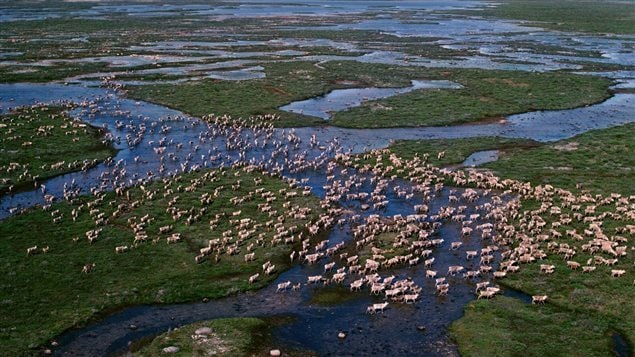 Caribou migrating across the tundra in summer around Hudson Bay. Barren ground herds that once numbered in the hundreds of thousands have declined dramatically, in many cases by over 90 percent
Photo Credit: MarCom -WWF Canada

A science committee has raised the alarm over the future of the populations of two migratory species which are in steep decline.

The Committee on the Status of Endangered Wildlife in Canada (COSEWIC) held its semi-annual meetings on species at risk between November 27 and December 2. They listed these two major species as being at increased risk

A number of caribou populations migrate across substantial distances in Canada each year from summer calving ground to wintering grounds and a variety of studies have shown virtually all herds have suffered steep declines.

In a press release Justina Ray, co-chair of the Terrestrial Mammals Subcommittee said , “Caribou are, sadly, very sensitive to human disturbances, and we are disturbing Caribou more and more.  These stressors seem to be interacting in complicated ways with rapid warming in the North.  Many of the great northern Caribou herds have now fallen to all-time lows, and there is cause for concern that they will not rebound in the same way they have before.”

Two specific herds were examined, The Caribou Barren-ground population was assessed as Threatened, while the much rarer Torngat Mountain population in far northeastern Canada was assessed at even higher risk – Endangered. This means that population is at imminent risk of disappearing altogether.

In October, the World Wildlife fund said only about half of barren-ground caribou remain, and there has been a decline of over 90 percent of the Bathurst herd, and Baffin Island herds.   It is thought that climate change and disruptive human development activities (mining, oil and gas exploration, urban expansion) are part of the reason for the steep decline.

Another iconic species, the colourful Monarch butterfly. Every fall the colourful insects begin their migration from Canada and the northern US, southward toward Mexico some 4,000 km away.  They spend the winter at a tiny specific area in Mexico and return northward in the spring. The vast round trip journey can take several generations.

The monarch species requires the milkweed plant to survive, but that has been threatened by changing farming practices especially in the US. The small Mexican habitat continues to be threatened by illegal logging.

Jennifer Heron, co-chair of the Arthropods Subcommittee of COSEWIC, summed it up: “We need to continue to support the conservation of milkweed caterpillar habitat both here in Canada and along the Monarch’s migratory journey, and we need to support continued conservation of critical overwintering areas. Otherwise, Monarch migration may disappear, and Canada may lose this iconic species.”