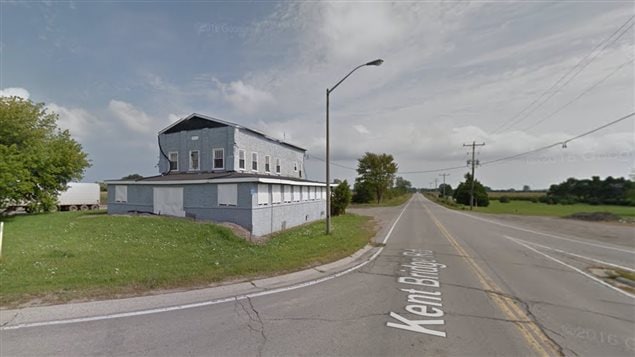 The front of the Eatonville Roadhouse in 2014, last physical reminder of Japanese-Canadian internment in Ontario during the Second World War, now boarded up and deteriorating, awaiting possible demolition.
Photo Credit: Google stereetview

It’s not much to look at, but a former small hotel/bar is the last remnant in Ontario of a troubled chapter in Canadian history.

Known as the Eatonville roadhouse, it sits in the middle of a rural area of southwestern Ontario between the towns of Morpeth and Blenheim.

Once owned by a Mr JA Eaton, in 1925, it had several rooms, a bar  and dance floor. In the 30’s it was owned by Howard Pyne, who sold bootleg liquor in the “dry” township until hotel owners in neighbouring “wet” towns complained to police.

Then in 1942, the federal government rented the structure to house 55 Japanese-Canadian internees. They were among a now highly controversial forced displacement of about 20,000 Japanese-Canadians moved away from the British Columbia coast over fears they could collaborate with Japanese forces and help an invasion. In 1998 the federal government officially apologized for the displacement and internment.

Between 1942 and 43, the men at the roadhouse were sent as labourers in nearby Rondeau Park clearing bush.

The building then became the property of a large family farming operation which used it to house seasonal migrant workers.

Several years ago because of its role in the internment episode, it had been listed on the heritage registry.  However, in the past few years it has sat empty and become a target for vandals and the curious, including the occasional raccoon.

The DeBrouwer family which owns the building approached the Chatham-Kent municipal council in 2015 with a request to tear it down.

The regional Heritage Committee wanted to see it listed officially as a heritage property, but earlier this year the Council voted instead to remove the property from the heritage registry saying the deteriorated condition meant the building was “beyond repair”.

Members of the National Association of Japanese-Canadians then visited the site but said it would cost more or less a half million dollars to acquire and restore the building.

The DeBrouwer family has said they’ve taken no action this year in hopes someone would want the building but indicate they can’t wait much longer as the building continues to deteriorate.