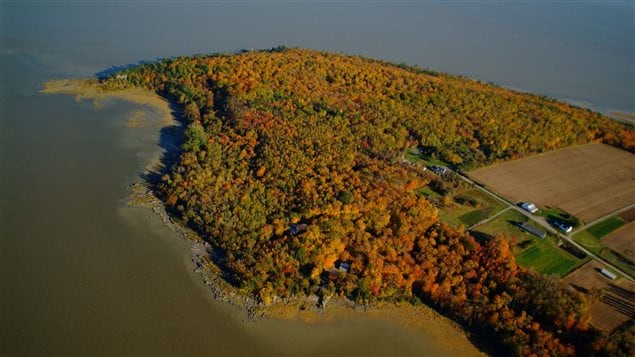 Lands in the St. Lawrence River include rich ecosystems that are home to vulnerable and unique species.
Photo Credit: Claude Duchaine

A non-profit conservation group has acquired three new pieces of land in the St. Lawrence River enabling it to protect some unique ecosystems that are home to vulnerable species of plants and animals. They add to areas already protected by the group, the Nature Conservancy of Canada (NCC).

The St. Lawrence River is one of the largest bodies of water in the world. It extends from the Great Lakes in the heart of North America all the way to the Atlantic Ocean.

A major stopover for migratory birds

It has many bays, marshes and channels and is on the path that many birds take as they migrate from southern regions to breeding grounds in the north.

The newly-acquired areas include the western point of Ile de Grace, important for the preservation of the copper redhorse and map turtles.

The Grondin swamp is the last large-area swamp on the river and home to Victorin’s water-hemlock and Parker’s pipewort, two plants only found in the St. Lawrence estuary.

Argentenay Point has a unique view of the river, its islands and the nearby Laurentian foothills. It contains a rare and unique forest. Its neighbouring grassy tidal flats are an important stop for migratory fowl.

The additions were made thanks to donations by families and help from the federal government Natural Areas Conservation Program. More funding is needed to help manage the areas and improve public access where possible. The NCC’s Hubert Pelletier describes the new acquisitions.