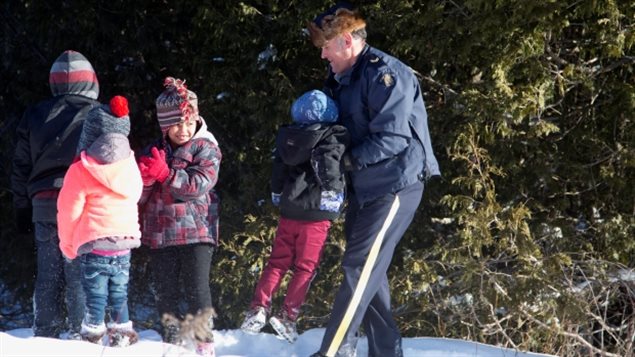 Police officers help undocumented children climb through the snow to cross the border from the United States into Canada.
Photo Credit: Christinne Muschi/Reuters

Montreal is latest to declare itself a ‘sanctuary city’

Montreal is the latest Canadian city to declare itself a ‘sanctuary city’ for undocumented refugees, reports CBC. While the designation means these refugees will have access to local services, critics say the move is largely symbolic.

The advocacy group, Solidarity Across Borders says Montreal police routinely arrest undocumented migrants and hand them over to the Canadian Border Services Agency. The group wants Montreal council to ban border guards from all city premises.

U.S. President Donald Trump’s hard line against refugees has prompted a growing number of asylum-seekers to flee across the border into Canada.

Several Canadian cities are considering declaring themselves to be sanctuaries. Among those that already have are Toronto, Hamilton and London in the province of Ontario. Toronto declared in 2013, but a study by Ryerson University determined it lacked funding and political leadership to make good on its commitment.