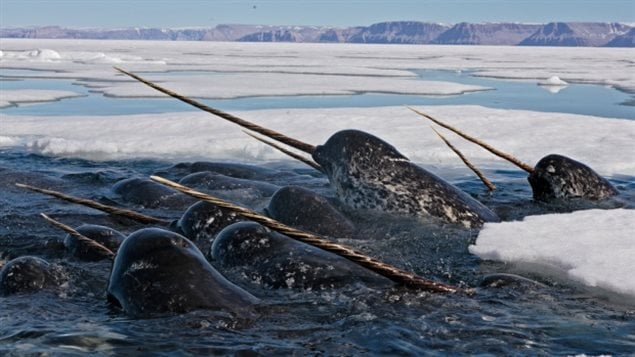 The narwhal tusk is really a canine tooth. They are related to beluga whales. A new report says the increased presence of orcas may be more significant in changing marine mammal habits in the Arctic than food resource changes, both caused by climate change and warming.
Photo Credit: (Paul Nicklen/WWF)

Researchers had thought this might happen. With the Arctic sea ice melting sooner, and forming later, and with decreasing ice extent, one of the world’s biggest predators, the killer whale, has been moving further into new areas, and for longer periods.

What’s more is that it is changing the habits of other Arctic mammals notably narwhal, beluga, other whales, and seals.

Steve Ferguson of Canada’s Department of Fisheries and Oceans (DFO) is quoted by the Canadian Press saying, “Just having (killer whales) around is terrorizing their prey and causing them a lot of difficulties”.

Ferguson and the research team used telemetry to track a pod of killer whales and several narwhal over an 18 day period in Admiratly Inlet on the northern tip of Baffin Island.  This is where several thousand narwhal gather in summer to feed and raise young, in what was once relative safety.

Their research was published in the science journal, Proceedings of the National Academy of Sciences (USA) under the title, “Sustained disruption of narwhal habitat use and behaviour in the presence of Arctic killer whales”.

They found vastly different movement habits of the narwhal when orcas were anywhere in the inlet.

With no killer whales in the vicinity, the narwhal went several kilometres offshore to hunt shoals of prey fish, but when the orcas were anywhere within 100 kilometres, they would huddle within a few hundred metres of the shoreline. The research showed they would stay there as long as orcas were in the inlet.

“I think the narwhal are scared to death,” said Ferguson. “Watching your brother or sister or mother get killed and eaten by a killer whale would cause a little post-traumatic stress in most of us”.

Ferguson says the narwhal probably know when orcas are around because although the orca are quiet when hunting, they tend to make celebratory noise when they’ve made a kill, thereby announcing their presence.

The killer whales hunt together similar to a wolf pack and try to push a pod of narwhal, or individual victims into deep water. They will circle their prey to keep them from escaping.  Sometimes however a pod will make a break and try to flee towards shallower water.  Inuit who have observed this sudden desperate rush to escape have even developed a word for it, “Aalirijuk,” for “fear of killer whales”.

The increased presence of killer whales also seems to be affecting other species like bowhead whales which head toward areas of ice when orcas are around. The killer whales with their high dorsal fin, don’t like to travel into icy areas.

The paper is called, Sustained disruption of narwhal habitat use and behavior in the presence of Arctic killer whales

Ferguson notes that these observations are also changing the typical theories of climate change.
“Most traditional science views changes to occur from the bottom up – the food supply changes and it ripples its way up the food web. A few of us believe the changes can happen from the top down and be just as significant.”