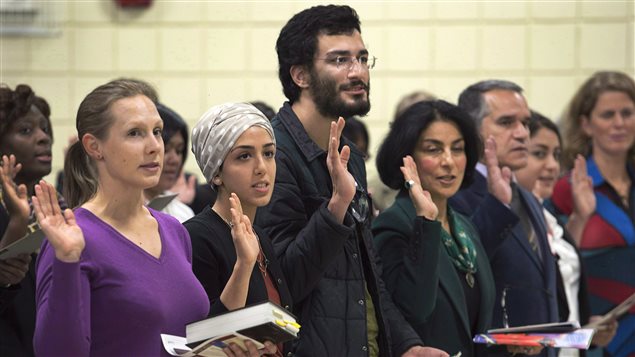 New Canadians took the oath of citizenship in October 2014. One in five Canadians are immigrants, according to figures from 2011.
Photo Credit: Andrew Vaughan/Canadian Press/file

Another public opinion survey has been conducted to test Canadian attitudes towards immigrants and it found almost three-quarters of respondents think they should be tested on “Canadian values.” This is a controversial idea held by Kellie Leitch, a candidate for the leadership of the opposition Conservative Party.

Almost 40 per cent of respondents think there are too many immigrants and that is a threat to the “purity” of the country, according to a CROP poll commissioned by the French-language public broadcaster, Radio-Canada. More than half are concerned about the future of culture and identity.

The survey found 46 per cent think immigrants make Canada a better place to live, but 23 per cent would favour a ban on Muslim immigration to Canada. The number is even higher in the province of Quebec at 32 per cent. People in that province are very concerned about cultural identity given they are a minority in North America. Many radio hosts and politicians have exploited the issue.

There have been heated debates about banning religious symbols in public. This survey suggests that 65 per cent of Quebecers don’t believe in such a ban for the general public, however the majority thinks it should apply to educators, people in authority and all public servants.

Canada is one of the most multicultural countries in the world. Radio-Canada notes that in 2011, one out of every five Canadians were immigrants. Canada welcomed more than 320,000 immigrants last year where it usually brings in an average of 250,000.

The survey may be a shock for many Canadians who believe this country to be immune to the anti-immigrant sentiments that have swept the U.S. and some European countries.