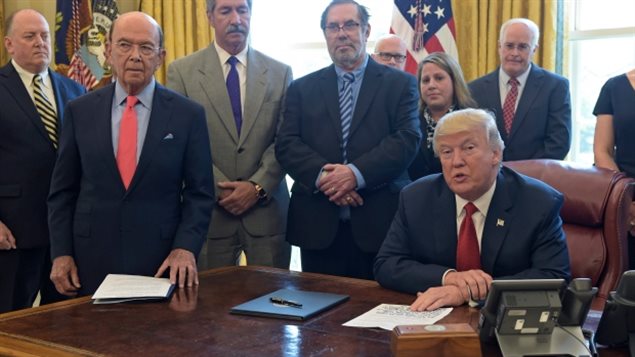 U.S.President Trump vowed during the signing of an executive order at the White House last Thursday to strike back at Canada for its unfair trade.
Photo Credit: Susan Walsh/Associated Pres

The cards are stacked- H Nelson

Late Monday, the United States announced it would impose immediate countervailing duties on Canadian softwood lumber imports of up to 24 percent.  It also said the duties were retroactive to imports of 90 days previously. Additionally a “dumping” investigation is underway expected to impose more duties in June.

Following a friendly meeting between the two leaders in February and comments by U.S. President Trump Canadians had thought U.S. trade anger was directed almost entirely against Mexico.

Thus, the harsh action on softwood came seemingly as a surprise, and there has been strong condemnation by a wide variety of Canadian politicians and the lumber industry saying American allegations against Canadian practices are without foundation.

The issue dates back over three decades, but after long negotiations  and international legal battles which Canada repeatedly won, a deal was struck between the two nations.

That deal expired two years ago, followed by the expiry last year of an additional negotiation grace period of one year.

The main U.S. argument hinges on the fact that in the U.S., wood is cut on mostly private lands in a competitive market bidding for access.

In Canada, trees are harvested (mostly) on Crown land and (generally) at fixed prices set by the provincial or federal governments, a so-called “stumpage” fee.

The Americans say because this is not a competitive situation, the fees are artificially low and constitute subsidies not permitted under trade laws.Professor Nelson says the Americans have not been interested in serious negotiations up to this point, waiting for imposition of duties as a bargaining strategy.   In a recent press conference  U.S. Commerce Secretary Ross  linked dairy and softwood with the problems they have with NAFTA (North American Free Trade Agreement), although dairy and softwood are not connected with NAFTA.

He points out that the duties will have far greater negative effect on the Canadian industry than any reduction in softwood imports would have on the US economy.

Canadian politicians have said they hope a deal can be reached quickly, but would take the case to international litigation once again if necessary.

The Americans meanwhile are also conducting a “dumping” investigation which would likely impose even more fees on Canadian imports.  He says this is yet another way to ramp up pressure on Canada to accept a deal highly favourable to the U.S.  This could involve quotas limiting imports.

Thousands of Canadian jobs at risk

He also notes that while Canada may win, eventually, in international courts, severe damage could occur to Canadian companies in the interim, possibly with the closure of some of the many smaller mills if it drags on too long.  There are literally tens of thousands of jobs that depend directly on softwood lumber, and as many more that would be indirectly affected.

The Americans meanwhile are also conducting a “dumping” investigation which would likely impose even more fees on Canadian imports.  He says this is yet another way to ramp up pressure on Canada to accept a deal highly favourable to the U.S.  This could involve quotas limiting imports.

At the end of a long legal battle he says, “Yes you can win in the long term, but who’s alive to be there to pick up the cheques?”

The Canadian and U.S. leaders had a telephone conversation yesterday about the situation, but on their respective websites the details of what took place differ somewhat.

In the U.S, a short note only mentioned the call, mentioning the lumber dispute as a secondary issue in a single sentence

In Canada, the Prime Minister’s website posted a somewhat longer statement in which lumber was first, stating in part.

“…the Prime Minister refuted the baseless allegations by the U.S. Department of Commerce and the decision to impose unfair duties. The Prime Minister stressed that the Government of Canada will vigorously defend the interests of the Canadian softwood lumber industry, as we have successfully done in all past lumber disputes with the U.S. The two leaders agreed on the importance of reaching a negotiated agreement…”

Professor Nelson doesn’t agree fully with the idea that this is the opening salvo in a much wider trade war between the US and Canada.

He points out this dispute has been going on for about 35 years and the end of the current deal and grace period just happened to coincide with the arrival of a highly protectionist President.

Professor Nelson also noted that while the U.S. has always relied on Canadian lumber to supply a portion of its need, the main consideration for the U.S. industry in the dispute it to push up prices and generate greater profits.