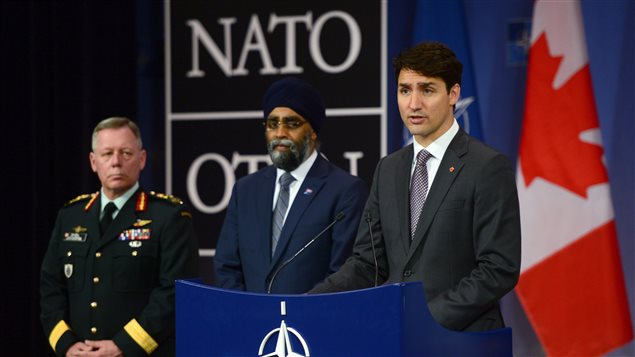 Prime Minister Justin Trudeau, right to left, is flanked by Canada's minister of defence and the chief of defence staff at a news conference at NATO headquarters in Brussels, Belgium.
Photo Credit: Sean Kilpatrick/The Canadian Press

Today will mark the first time U.S. President Donald Trump meets with members of NATO and they are hoping to hear a strong commitment from him to the alliance.

“The NATO allies, particularly those in Europe, want to hear from the president of the United States that if they are attacked by Russia he will come to their defence,” says Colin Robertson, a former diplomat and vice-president of the Canadian Global Affairs Institute.

“They’ll be looking to him to give strong statements of support for collective security and for the concept of NATO.”

Intelligence leaks likely will be discussed

Also on the agenda will be security in light of the terrorist attack on the Manchester arena. Britain will express its dismay about a U.S. leak of intelligence information on the investigation and it has already said it will no longer share this with the U.S.

Countries will seek assurance that the U.S. will take action to protect intelligence information that is shared among allies. Canada has already stated it will continue to share intelligence with the U.S.

Canada defends its funding for NATO

The U.S. is likely to press NATO members to live up to their commitment to contribute two per cent of their GDP to the alliance. Most do not. Canada has come under fire spending only 1.02 per cent.

In its defence, Canada says other countries do not calculate costs like pensions and it intends to recalculate its spending in light of that. Prime Minister Justin Trudeau said he will not announce any changes until he tables his defence policy review on June 7th. He noted Canada pulls its weight in NATO, contributing training and policing. Canada will also be leading one of NATO’s forward brigades in Latvia.

NATO members will want to hear Trump’s position on Russia. “For the Eastern Europeans in particular, (Russian President) Vladimir Putin, who Mr. Trump has variously described as someone he admires and someone he’d like to do business with, for them, he’s Darth Vader,” says Robertson.

“They see him as responsible for cyberattacks, the invasion and occupation of Crimea and the presence of little green men in Eastern Ukraine. They would like Mr. Trump to be more categoric in describing Russia as an aggressor, particularly when it comes to what they’ve done in Eastern Europe.”

Leaders may seek advice on Trump

Leaders may want to query Canadian Prime Minister Justin Trudeau on his handling of Trump. Robertson says Trudeau appears to have taken a “Goldilocks approach—not to hot, not too cold.” He has met with Trump successfully and has sent ministers and government officials to strengthen ties with the U.S. president.