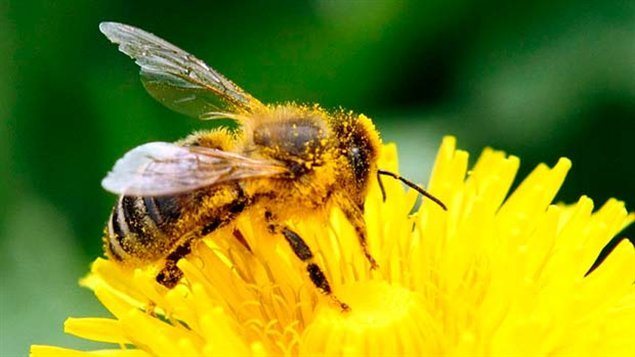 Unlike some other pesticides which remain on the surface of a plant, neonicotinoids are absorbed by the plant and are present in the pollen and nectar. Neonics are a neurotoxin acting on the brains and nervous system of insects.
Photo Credit: Heinz-Peter Bader- Reuters

Many studies have linked a relatively new insecticide group, neonicotinoids, which were developed in the 1980’s and 90’s, to a marked increase in bee deaths and hive mortality.

Neonicotinoids are neurotoxins, and unlike other chemical insecticides which are on the surface of plants, these are absorbed into the plant spread throughout the entire plant including into pollen.

In the past, critics have said the scientific studies linking bee problems with the chemical were due to unrealistic doses given to the bees and or conducted using unrealistic conditions the bees wouldn’t encounter in a natural situation.

Unlike other studies, this one involved an actual real world time factor (full season) and dosage levels.  What they found however clearly validated the previously criticised studies.

The study was published online today in the journal Science under the title, “Chronic exposure to neonicotinoids reduces honey bee health near corn crops” (abstract HERE)

Neonic treated corn and soy seeds are the most common of the treated crops in Canada.

This study involved some 55 colonies in real world, exposure to the toxin and had colonies randomly dispersed with some beside corn fields, and others far from corn field.

The study found some surprising results. The first was that the bees were absorbing neonics even before corn was planted. The levels remained low but constant throughout the season.

The sub-lethal levels however did compromise bees, with workers dying about 23 percent earlier than normal. As the bees aged flights were much longer than normal as the neuro-toxicity progressed. This latter suggests either the bees were weaker and/or had more trouble orienting themselves to find pollen, and then find their way back to the hive.

Also hive cleanliness suffered as did the critical ability to replace the queen if she died.

They also found that corn was not the bees first choice for pollen, meaning treated corn itself was not a great source consideration.

The fact that they were absorbing neonics even before corn was planted, and that pollen was being preferably gathered not from the treated corn but from other plants around the field suggests that the water-soluble neonics were getting into ground water and being absorbed by surrounding wild flowers and trees, that is spreading into the environment beyond the confines of the corn itself.

What they also found was that the bees had some 26 compounds in their bodies. Among them were herbicides and fungicides. The other surprise that a common fungicide, boscolid, combined with neonics and actually doubled the neonic toxicity.

“The effect of neonicotinoids on honey bees quickly turns from bad to worse when you add the fungicide boscalid to the mix,” said Professor Valérie Fournier of Laval University who collaborated with the York U team.

Professor Zayed said this might explain differences in the degree of bee and hive mortality, i.e. much higher mortality in an area where a farmer used both neonic-coated seeds, and sprayed boscolid fungicide on their crop.

Professor Zayed also notes that it’s easy to study honeybee colonies which are highly socialized and human managed, but most native bees are solitary and often specialize on a limited number of pollen sources. He says it is very likely their numbers are affected be neonicotinoids to an even greater extent that the domesticated bees.