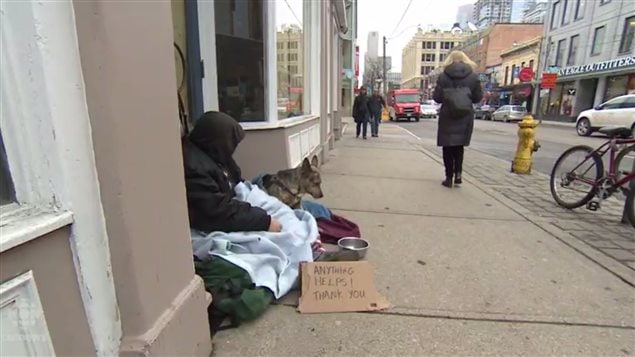 Panhandlers in Ontario are liable for tickets under the Safe Streets Act. Some have fines backed up totalling thousands of dollars. They say the tickets are another burden and mean they can never get out of their cycle of poverty and homelessness.
Photo Credit: CBC news

It’s a long established practice. Police handing tickets for a variety of minor municipal infractions to street people who are the least able to pay them.

That’s now being challenged under the Charter of Rights and Freedoms.

Tickets are given for such things as loitering, littering, drinking in public, trespassing, and panhandling (begging).If for example a police officer sees someone asking for money from a passerby, and they get handed some change out of charity, they could potentially be charged under the SSA, especially if near banking machines, taxi or public transit stop, payphones, in a parking lot, or on a roadway at a stopped or parked vehicle.

In 1995, Ontario cut its welfare benefits by over 21 per cent, pushing many already below the poverty line, into even more desperate situations. An increase in panhandling on the street was often a last resort for people in dire financial situations.  In 1991, Ontario passed the “Safe Streets Act” (SSA) designed to curb aggressive panhandlers (beggars) and squeegeeing (cleaning car windshields at traffic lights).  In the major Ontario cities like Toronto or Ottawa literally thousands of such tickets can be handed out every year.

That Act however is now being challenged by a community centre legal clinic in Toronto, Canada’s biggest city.

In an email to RCI, the Fair Change Legal Clinic said it had previously launched a petition against the Act but said that was simply ignored by the Ontario government. As result they have resorted to this legal challenge.

Quoted in the CBC, executive director of the Fair Change Clinic Joanna Nefs said,  the law is wasteful and oppressive, “’It’s the worst kind of law. It hurts only the most vulnerable”.

The fines almost never get paid and Joanna Nefs” says “Taxpayers are still paying for the courtroom, Justice of the Peace, prosecutors and administrative staff to process the tickets”.

Another lawyer working on the case, Peter Rosenthal, quoted in Canadian Lawyers Magazine says,   “If the money spent attacking street people was instead spent on providing for them, there would be much less panhandling.”

The Clinic is currently gathering affidavits to present this September to the Ontario Attorney-General. The A-G will have time to respond and a court date would like be set in the spring of 2018.

In 2004, the west coast province of British Columbia passed its own version of the Safe Streets Act which is almost an exact copy of Ontario’s.

A constitutional challenge to the Act in 2007 failed. In the case of 11 homeless men their convictions for washing windshields and asking for money were upheld as the courts agreed that the law infringed upon their Constitutional rights but that the charges were justified in the interest of public safety. The Supreme Court of Canada rejected an appeal.

Lawyer Rosenthal however says this time the case is much better prepared and with better arguments than previously.