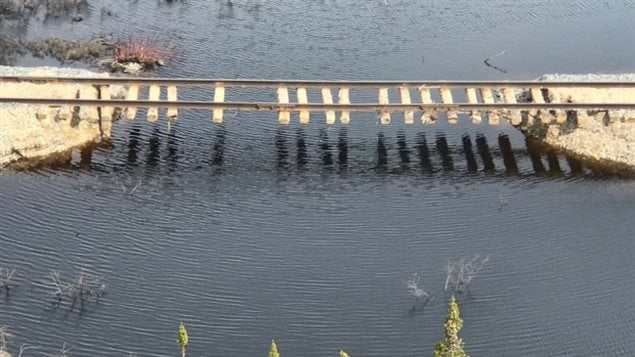 Canadian town stranded by weather and an American-owned railway

The Arctic town and port of Churchill  in northern Manitoba is remote. There are no roads to get there and only a single rail line running from the port, some 900 km south to the town of The Pas where it joins with the Canadian National Railway (CNR).

Unusually wet spring floods left large sections of the Hudson Bay Railway under water with some bridges weakened. That has left the towns 800 or so residents with the sea or air as the only expensive options for travel and supply in and out for the past two months.

“Omnitrax has an obligation to repair and maintain its line and maintain service to residents, and we expect Omnitrax to meet its obligations” Transport Minister Marc Garneau.

The American company that owns the line, OmniTrax of Denver, says it would cost between 20 to 60 million dollars to repair the line but claim they don’t have that kind of money.  In a statement sent to CBC news, the transport minister says the American company is responsible for repairs, while the company says it’s a public responsibility as the line is not commercially viable. The minister says if the company fails to take action, then the government would have to examine options to make sure residents are adequately provided for.

The company says it has a plan to do the repairs that would take about two months, and could start in September but added it doesn’t have the resources and that federal and provincial governments should contribute money. It also noted they still need a few weeks to assess the damage; four to assess the situation and two to write a report.

The situation has caused great controversy with claims that the company claims are inflated to questions about allowing foreign ownership of critical infrastructure.

The mayor of Churchill says the company is quickly running out of time to get things organized for repairs to start. If they don’t it may take until next year to reestablish the vital connection.

Local First Nations aboriginal leaders, who also run the Keewatin Railway Company, say they could repair the line in two months, if governments put up the money.

Churchill was developed as a port in 1928, primarily as a shortcut to load western Canadian grain onto cargo ships for overseas markets.  In recent years it has become a way for tourists to visit the town for polar bears and beluga whale sightseeing tours.

The CNR owned the line and port but by the 1990’s it was in desperate need of maintenance, grain shipments were diminishing and the company was losing money. CNR announced plans to abandon the line, the port facilities and essentially the town as well.

With millions of dollars in public funds to aid the sale, OmniTrax bought the line and the port facilities with promises of big investments to improve the line and port.

Since then however OmniTrax has invested much smaller amounts and has publicly contradicted itself about amounts paid for maintenance.

The U.S. company then asked for more public money in 2008 and again in 2010. The Financial Post reports that since 1997, some $140 million in public money from the federal government alone has gone into Churchill support.

Millions in government subsidies to farmers to reduce shipping costs were quickly eaten up as OmniTrax hiked its fees, which hurt shipments to the port. The American firm closed the port in 2016, putting about 100 residents out of work.

For now, it appears  questions of who will do the work and who will pay, seem to remain in some doubt.