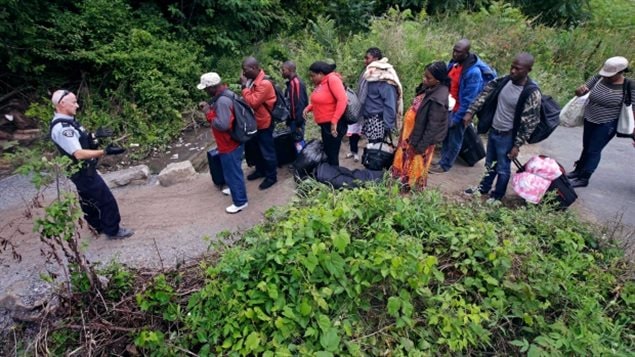 Fewer than 1% of asylum seekers crossing illegally into Canada have a serious criminal background, border official

There have been large pockets filled with consternation about who is getting into getting into Canada these days–certainly since last weekend’s so-called terror attack in Edmonton that saw a police officer stabbed and four pedestrians injured during a high-speed police chase.

Abdulahi Hasan Sharif, a Somali refugee claimant, is currently in police custody, charged with a number of crimes, including five counts of attempted murder.

Canadian officials said this week Sharif went through the “regular process,” entered at an official port of entry and was granted refugee status later that year.

Meanwhile, American authorities, who ordered him deported in 2011, have said he had no criminal record at the time.

On Parliament Hill Thursday, a Canadian Border Services Agency official told the House of Commons immigration committee that fewer than one per cent of asylum seekers crossing illegally into Canada have a serious criminal background.

CBSA associate vice-president Jacques Cloutier added that any potential risks are swiftly identified and dealt with.

“We are dealing with situations on site immediately as they present and they do not present on a regular basis,” Cloutier said.

“It is overall, in our estimation, even less than one per cent of cases that are cases dealing with serious criminality and which are resolved at the time, in their entirety.

Immigration lawyers and advocates cite the Safe Third Country Agreement (STCA) as a major reason for the spike in asylum seekers crossing illegally into Canada in 2017.

The agreement bars entry to Canada from the U.S. at official border crossing points if the person’s claim has already been rejected by the U.S.

But people crossing into Canada can avoid those points by moving across unguarded territory.

The federal official opposition Conservative Party has been calling on the government to amend the agreement so it would not just apply at official crossing points but across the entire border.

Earlier this week, Canada’s Immigration and Refugee Boad said about half of the asylum claims heard so far from those who’ve crossed the Canada-U.S. border since July have been rejected.