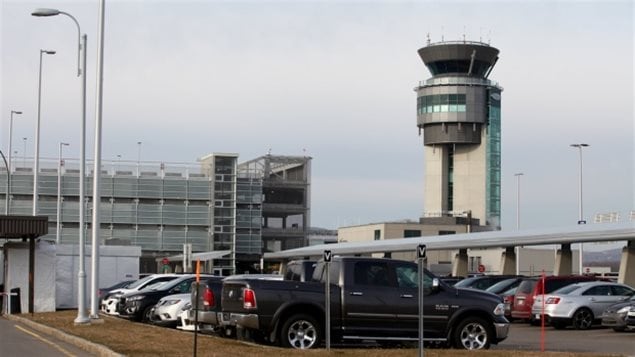 A commercial plane was struck by a drone as it approached the Jean Lesage airport in Quebec City last week. It was the first such incident in Canada.
Photo Credit: Radio-Canada / Carl Boivin

“This should not have happened, that drone should not have been there, and it’s important to point out that aircraft are particularly vulnerable when they are on their final approach,” Garneau, a former NASA astronaut, said at a press conference Sunday in Montreal.

The Skyjet plane with eight people on board was arriving from the city of Rouyn-Noranda and landed safely, suffering only minor damage.

Garneau estimated that the collision occurred about three kilometres from the airport at a height of 450 metres.

It was the first time in Canada a drone has hit a commercial aircraft in Canada, but the national chairperson of the Canadian Federal Pilots’ Association, Greg McConnell, said such an incident “was just a matter of time.”

Transport Canada instituted safety measures regarding drone flights earlier this year. Final measures are expected to be finalized in 2018.

Current rules say drones should be flown below 90 metres and at least 5.5 kilometres away from any airport, seaplane base or areas where aircraft take off and land.

Violations can result in a $25-thousand fine and possible jail time.

Transport Canada says 1,596 incidents involving drones have been reported this year with 131 of them deemed aviation safety concerns.