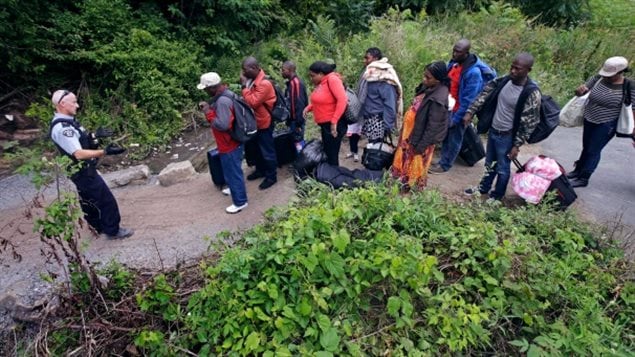 Figures from Canada’s Immigration and Refugee Board (IRB) show that the influx of asylum seekers has clogged the system.

Thousands of claimants have crossed into Canada through the porous undefended border.

About 13,000 of the 32,000 claims have been made this way, but only a few hundred have had their claims processed.

Sean Rehaag (SJD) is a professor at the Osgoode Hall Law School at York University.

A huge spike in claims being made from people entering from the U.S. occurred this year, much of that attributed to policies there that would seek to end programmes allowing asylum seekers and others to remain there.

Many are Haitians who came to the U.S  in a temporary programme as a result of natural disasters. With the threat of being sent back to their country, thousands have entered Canada.

The latest figures show that 69 per cent of  those who crossed illegally into Canada are being accepted. However of the some 10,799 crossings between March and September, only 592 have been processed so far, with 408 cases accepted.

At least two recent polls show a majority of Canadians are not happy with the illegal entries, and don’t accept the notion that they qualify as refugees.

Professor Rehaag says the IRB acceptance rate show they do meet the criteria for refugee status.

He goes on to say, the illegal or “irregular” crossings are the result of what he calls as Canada’s attempt to keep them out. This is through the “third safe country agreement” with the U.S. whereby a claim for asylum must be made in the first “safe” country where the person lands. Thus someone on the U.S. cannot come through a regular border crossing to make a claim as they will be turned back.

International and Canadian law says if they get into Canada, their claim must be heard.

Rehaag says that the government needs to spend more on the refugee claims system to reduce the backlog.  A new report says claims are now taking up to 16 months, and there is a backlog of cases.

Professor Rehaag also says more needs to be done as people will continue to come even once the winter sets in and poses a real risk to their safety. He notes that last year, one person died, while some others suffered severe frostbite in their attempt to make it into Canada.