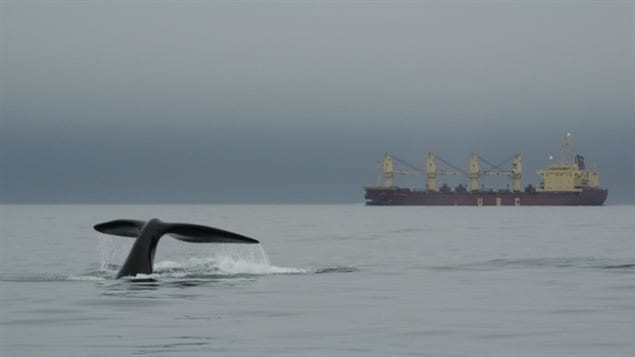 Right whales are very slow swimmers and have often been hit and killed by the much faster moving cargo and cruise ships
Photo Credit: Kara Mahoney Robinson/New England Aquarium

Scientists at at annual international conference on North Atlantic Right Whales have expressed extreme concern over the species survival.

The meeting comes with special urgency after some 15 of the whales were found dead this summer. A 16th whale carcass has just been located today on an island south of Cape Cod Massachusetts.

At least some of the slow moving animals were hit by ships, others died tangled in fishing gear.

The group was told on Sunday that while 15 of the endangered animals were killed there were only 5 live births this year, meaning a loss of ten whales in a population already dangerously low.

“Time is of the essence and we must work together to determine how to best protect this critically endangered species”. International Fund for Animal Welfare

The latest research indicates there are a mere 451 of the whales as of 2016, and of that only 23 per cent are breeding females who appear to be dying younger and having fewer calves.  The meeting was told there has been a 40% reduction in new calves since 2010 , and there were no “first time” mothers this year.

“At what point do you say these numbers are so low and so concerning that we actually have to do something? We’re telling you as scientists: that time is now,” said Mark Baumgartner, the chair of the North Atlantic Right Whale Consortium, at the group’s annual meeting at Saint Mary’s University in Halifax.

The meeting was told that breeding females may be gone in 20 years, which in turn means no calves, and the end of the species.

Part of the problem is that fishing ropes such as used by lobster and crab fishermen, have become thicker and stronger and so whales can’t break free. A study showed that  forces applied during fishing does not require rope strength over 1700 pounds and that if industry reduced rope breaking strength to 1700 pounds (7.56 kN) whale mortality from entanglement would be reduced by over 70%.

Right whales have moved from traditional summer grounds further into the St Lawrence where there is heavy ship traffic. In one measure the government imposed a 10-knot speed limit in an effort to reduce ship strikes. Although some fines have been levied, most ships have been complying. The snow crab fishery was also closed earlier than planned.

Scientists, fishermen, large-vessel operators and Indigenous groups will also be meeting next month in Moncton in an effort to reduce the number of right whale deaths. That meeting will be hosted by federal Fisheries Minister Dominic LeBlanc.