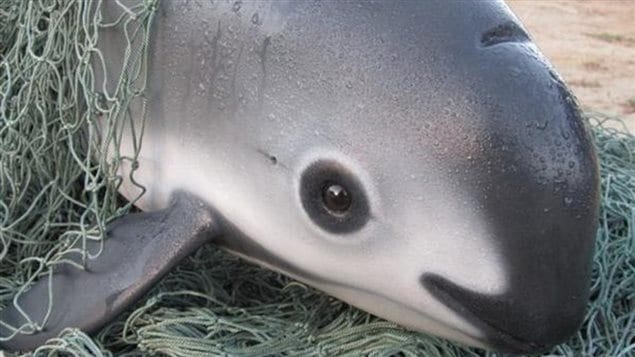 With it’s distinctive dark eye patch and dark lips, the vaquita has been sometimes called the panda of the sea. The smallest cetacean is now the most endangered marine mammal on earth.
Photo Credit: savethewhales.org

Environmental group in campaign to save vaquita porpoise

Rarest and most endangered marine mammal in the world

The Sea Shepherd conservation organisation, founded by Canadian Paul Watson, is back in the Gulf of California in it’s ongoing effort to save the almost extinct vacquita porpoise. Two of Sea Shepherd’s ships will be in the Gulf for operation Milagro IV, in an effort to preserve this smallest cetacean by combatting illegal fishing and conducting other conservation measures.

The vaquita is the smallest of marine mammals measuring about 1.5 metres for adults and lives only in the northern end of the Gulf of California off the Mexican coast. They live only about 20 years and reproduce slowly at one calf every two years. In 1997 the population was estimated at a mere 600, and now there are possibly only 30 left, meaning a very real possibility of extinction.

Unlike other environmental groups, Sea Shepherd has sometimes been criticised for their occasionally aggressive actions, which in spite of such criticism, has just as often seen concrete and more immediate results to confront and expose illegal activities on the high seas related to safeguarding biodiversity.

“We must have a higher regard for ocean life if these species are to survive. Human greed and lack of respect for the oceans is responsible for near-wipeout of the vaquita. If it goes extinct, that’s another broken link in the eco-chain and one step closer to our own extinction”. Campaign Leader Jean Paul Geoffroy.

Although not hunted itself, the small cetacean has been the victim of gillnet fishing for the similar sized totoaba. The totoaba is itself threatened and no international trade is allowed under the Convention on the International Trade in Endangered Species. (CITES), but illegal fishing occurs due to a demand for the swim bladders of the totoaba, mostly for the Chinese market where some sources say a single bladder can fetch up to $10,000.

Both the Sea Shepherd vessels M/V Farley Mowat and the M/V John Paul DeJoria will work with the Mexican government to protect the waters of the vaquita marine reserve, remove nets, patrol for poachers, document issues facing this endangered cetacean and continue to collect data to share with the scientific community. The campaign will run through May 2018.
This is the fourth year of the Sea Shepherd campaign

“If not for the confiscation of hundreds of nets and our drone interventions in finding the poachers at night, the vaquita would now be extinct. There are some people who say this is a lost cause and that extinction is inevitable. We disagree. Increased patrols, increased interventions coupled with the courage and the passion of our volunteer crews can prevail. To those who say this is a lost cause, we intend to prove them wrong. Saving the vaquita from extinction is a challenge but we are up for that challenge and we hope that you agree. Making the impossible possible is something we have been doing for forty years.” Founder, Captain Paul Watson