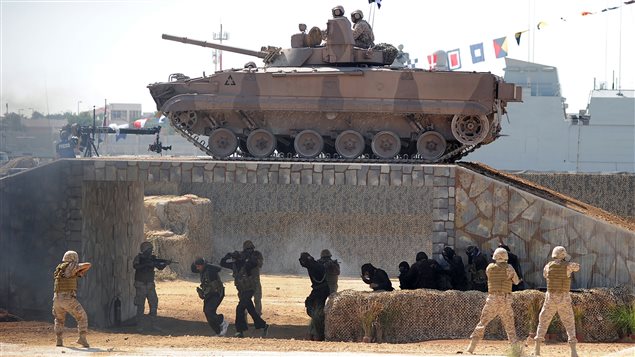 Canada and the United Arab Emirates (UAE) have signed a defence cooperation arrangement that will make it easier for the Canadian defence industry to access one of the world’s most lucrative arms markets and bolster military ties between the two countries.

Defence Minister Harjit Sajjan signed the agreement on Friday during his five-day tour of the Middle East that included stops in Jordan, the UAE and Kuwait.

“The signing of the Canada-UAE Defence Cooperation Arrangement is a testament to the enduring partnership between our nations,” Sajjan said in a statement. “We will continue our joint efforts to counter violent extremism in the Middle East as we work to build a more peaceful and prosperous world for both Canadians and the Emirati people.”

“Defence Cooperation Agreements are an important tool for governments to enable more comprehensive defence trading relationships, and exports are an important driver of innovation and growth within Canada’s defence and security industries,” Christyn Cianfarani, president and CEO of the Canadian Defence and Security Industries (CADSI), said in a statement to Radio Canada International.

The UAE ranks among the top 15 defence spenders in the world, according to Business Monitor International (BMI).

According to the official Report on Exports of Military Goods from Canada, in 2016, Canada exported $8.1 million worth of arms and defence products to the UAE, a drop in a bucket given the UAE’s defence budget.

The UAE is forecast to increase its defence budget over the next few years, with defence spending projected to grow to $41 billion ($52.8 billion Canadian) by 2025.

But closer defence cooperation with the UAE is also likely to raise more concerns about Canadian-made weapons and equipment being used in the commission of human rights abuses.

The UAE is an active participant of the Saudi-led coalition fighting the Iran-backed Houthi movement in Yemen.

The coalition is accused of indiscriminate bombings in Yemen, resulting in the deaths of thousands of civilians, said Kenneth Epps, policy advisor on the Arms Trade Treaty at Project Ploughshares.

“Consequently, there are serious grounds for concern about the nature of the defence cooperation between Canada and the UAE,” Epps said.

“Moreover, Project Ploughshares would argue that the UAE should not be added to the Automatic Firearms Country Control List, the list of countries eligible to import automatic weapons from Canada, and traditionally the next step after Canada has signed a defence cooperation agreement with a specific country.”

The war in Yemen has killed over 10,000 people and has unleashed what the United Nations calls the world’s worst humanitarian crisis.

Over 17 million Yemenis, nearly two-thirds of the population, is food insecure while 8.5 million people are on the brink of starvation, according to UN reports.

In all, close to 21 million people across Yemen are in need of humanitarian or protection support, the UN says.

Officials at the UAE embassy in Ottawa were not available for comment on the agreement at the time of the publication.