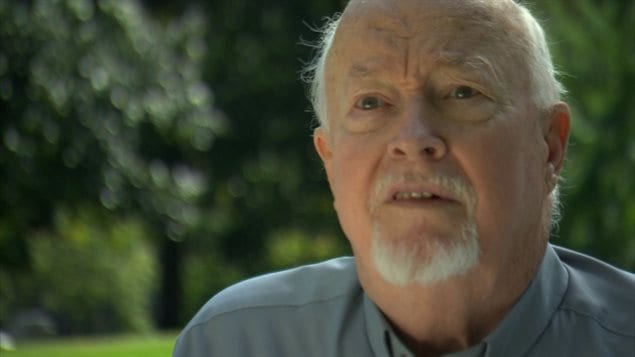 Father Emmet Johns was a priest in Montreal, but one who’s “chapel” was mostly the downtown streets of the city. His death at age 89 was announced this past weekend.

In 1988, after a lifetime as a parish priest, at age 60 he saw a rising number of homeless young people and a growing drug problem. He borrowed  $10,000 from a bank and began a new “mission”, called “ Le Bon Dieu Dans la Rue” –  “The Good Lord in the street”, which soon was shortened to simply “Dans la Rue”.

The man who became widely known simply as “Pops” had purchased a used motorhome (Winnibego type) and converted it as a mobile “mission” to provide a brief warm place for street kids, a bite to eat (hot dog) and coffee, and non-judgemental counselling or someone simply willing to listen to them.

He would then drive the vehicle to various locations in the city, and spend the nights often to the early hours trying to help at risk youth, a service which gained great respect in the mainstream society and provided funds and donations to his cause.

“When I think back to the first nights I spent on the Van, never could I have imagined that Dans la rue would be what it is today… We have had an impact on tens of thousands of young lives – and we continue to reach out to more and more every day.” – Father Emmett Johns, “Pops” (Facebook)

Through the years the service expanded in the 1990’s to include a temporary shelter for homeless teens, then later a day-centre was added that provided job training and a variety of social services.

In 1999 he was awarded the country’s highest civilian honour, the Order of Canada in recognition of his service to the community.

Three years ago, Dans la Rue opened 17 low-cost apartments as the organisation expanded to its present day staff of 65, with well over 100 volunteers.

With the announcement of his passing, many young people have commented how he helped them get back on their feet, adding they’re alive today likely only thanks to his help.

No date has yet been announced for a funeral.