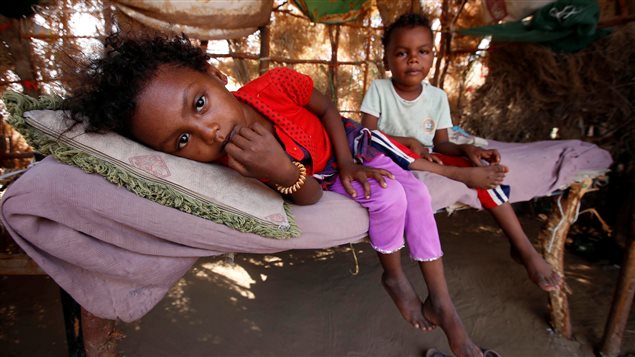 Children rest on a bed at their family hut at a poor neighbourhood on the outskirts of the Red Sea port city of Hodeida, Yemen November 12, 2017. © ABDULJABBAR ZEYAD

The federal government is providing humanitarian groups working in Yemen with $12.1 million in additional funding to help them respond to the growing humanitarian crisis in the war-torn country.

“Sadly, the conflict continues in Yemen, and its people—particularly women and children—continue to suffer greatly,” Bibeau said in a statement. “Canada remains committed to providing life-saving humanitarian assistance support to our partners to help the Yemeni people.”

The WFP will receive $6.5 million to improve the food security and nutrition.

The UNFPA will receive $2 million to provide psycho-social assistance, health services, equipment and medication to Yemeni women and girls who have suffered sexual and gender-based violence and to distribute dignity kits and reproductive health kits, the government said.

And the OCHA will receive $1.15 million.

Friday’s announcement comes on top of $34 million in humanitarian to Yemen announced by the Liberal government in March 2017 and an additional $7.7 announced in August 2017 as part of the Famine Relief Fund.

It brings Canada’s total humanitarian assistance committed for Yemen since March 2017 to $65 million for 2017 and 2018, the federal government said.

While Canada’s generous contribution to the ongoing crisis in Yemen has received praise from international humanitarian groups and UN agencies, Ottawa is also facing continuous criticism for its tacit support of Saudi Arabia, considered by many as one of the chief instigators of the war in Yemen.

Saudi Arabia, the Canadian defence industry’s largest client outside the United States, has been mired in a vicious conflict with the Iran-backed Houthi rebel movement in Yemen since March 2015 when it led a coalition of Gulf monarchies and Arab states to intervene on behalf of the ousted but internationally recognized President Abdrabbuh Mansour Hadi.

Activists and human rights groups have documented the use of Canadian-made military equipment by Saudi and Emirati forces in Yemen.

According to Global Affairs Canada, in 2016 Canada’s defence industry exported over $142.2 million worth arms and military equipment to Saudi Arabia, making it the number one destination for Canadian defence exports, outside the United States.

In 2016, the Trudeau government also approved the highly controversial deal to sell $15 billion worth of advanced Light Armoured Vehicles (LAV 6.0) to Saudi Arabia signed under the previous Conservative government.

The devastation of caused by the intractable conflict and Ottawa’s dubious role in supporting one of the main belligerents has rallied civil society groups to put further pressure on the Liberal government to cancel its multibillion contract to supply Saudi Arabia with LAVs produced by the Ontario-based General Dynamics Land Systems Canada.

About three-quarters of Yemen’s population is in need of humanitarian assistance, including 11.3 million children. The UN estimates that at least 60 per cent of Yemenis are now food insecure and 16 million people do not have access to safe water and proper sanitation.

“An entire generation of children in Yemen is growing up knowing nothing but violence,” said Meritxell Relano, the head of United Nations Children’s Fund (UNICEF) operations in the war-torn country.

“Malnutrition and disease are rampant as basic services collapse. Those who survive are likely to carry the physical and psychological scars of conflict for the rest of their lives.”

According to the United Nations High Commissioner for Human Rights (OHCHR), by mid-December, the conflict in Yemen had killed over 5,550 civilians and injured over 9,000, it has also caused the world’s largest epidemic of cholera, which has affected nearly 1 million people and counting, and has brought the Middle East’s poorest country to the brink of a famine.