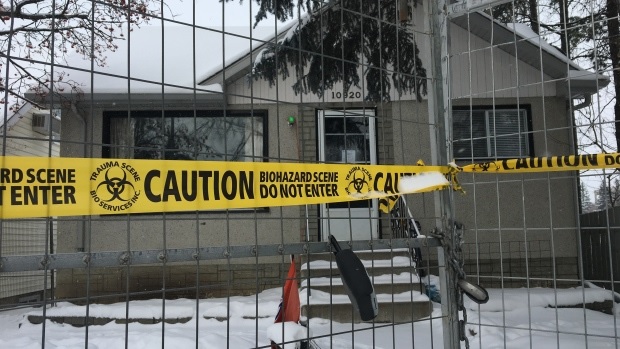 Police made a record drug bust after firefighters were called to this small Edmonton house. Because the drug is deadly even in trace amounts, the house has been declared uninhabitable. PHOTO: CBC

Police in the western city of Edmonton Alberta made a shocking discovery.

Firefighters responding to a fire call in a small house in the city found a suspicious powder in an empty basement unit and called police.

Some 16kg of blue and pink powder was found to be the deadly synthetic drug carfentanil, worth millions of dollars when cut into street doses PHOTO: Edmonton Police

The 16-kg of coloured powders were later found to be the synthetic opiod carfentanil, an extremely potent tranquilizer that even in tiny amounts can be deadly to humans. Carfentanil is far more potent even than fentanil itself an extremely potent drug, and both of which have been linked to the spike in drug-user deaths across the country.

The 12kg of white powder was thought to be caffeine, possibly used to “cut” –ie- act as a buffing agent for the carfentil according to police.

They said the drugs could have been transformed into more thant 160,000 doses  with a potential street value of over $3-million and constituted the biggest illegal drug haul ever for the Edmonton police.

University students renting the main floor of the house had made the initial call to firefighters and were unaware of the drug operation taking place in the basement.  Police have so far been unable to locate the tenant of the basement apartment.