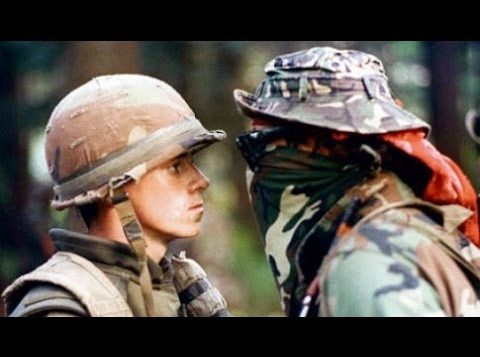 It was a conflict –a land dispute-that had its origins as far back as the early 1700’s. It reached a boiling point and international headlines on this day, July 11, 1990.

That was when a Quebec provincial police tactical squad stormed an armed Mohawk barricade. 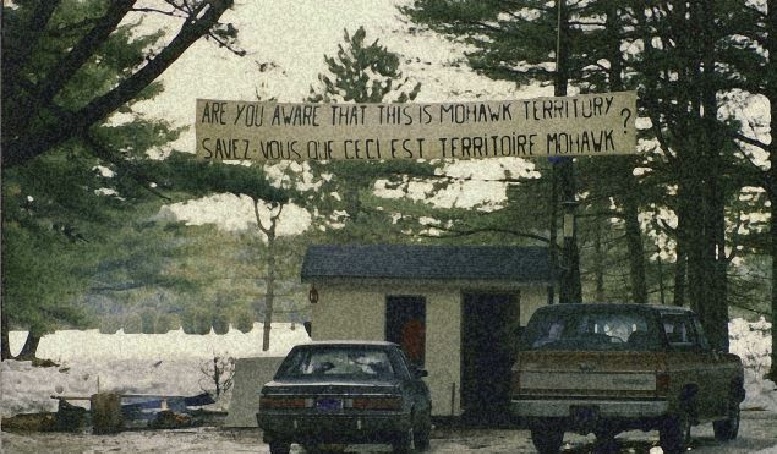 In March 1990, as tensions mount over a private development project planned in “the pines”, Mohawk of Khanestake drag an ice fishing hut onto a small road into the pines, saying it’s their land and development will not take place. (Ellen Gabriel)

A firefight ensued in which 31-year-old Constable Marcel Lemay was fatally wounded leading to a summer-long armed standoff between police and the Mohawk of Kanesatake, near the western Quebec village of Oka.

The “Oka Crisis” as it became known lasted throughout most of of 1990 and to this day remains mostly unresolved. 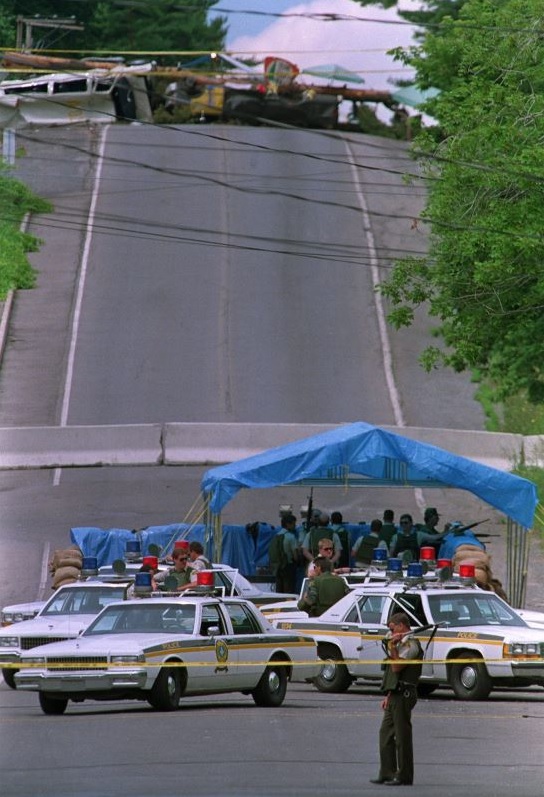 A telephoto shot showing the provincial police at the bottom of highway 344 with the Mohawk barricade at the top several hundred metres away, and made using abandoned police vehicles after the botched police raid July 11, 1990. (Ryan Remiorz-CP)

In the early 1700’s the French king granted a Catholic mission in “New France” a large parcel of land to be held in trust for the Mohawk in the region to the north west of Montreal   which the Mohawk called Kanestake.

The Church Mission instead quickly gave itself ownership of the land and began to sell parcels to settlers.

The story continues under British rule and peaceful protest letters by the Mohawk continue. These are mostly ignored. Khanestake lies on the western edge of the village of Oka shown by red balloon. (Google maps)

In 1936 the Seminary sold off most of the remaining land to the nearby Quebec municipality of Oka.

In 1959 Oka then leases a section of land to a private golf course in a disputed area adjacent to “the Pines”, an area in which Mohawk a century earlier had planted hundreds of pine trees to stabilise the soft earth.

As the dispute simmers over the years and land claims issues remain ignored or dismissed, in 1970 a militant group forms in Khanestake called the Mohawk Warriors. Their goal is to repossess land they claim.

In 1989, with no consultation with the Mohawk, Oka gave permission for the golf course to expand further into the Pines and build luxury condominiums even into a Mohawk cemetery.

That decision then enflames an already tense situation with Mohawk  who then barricade access to the area even as the war of words escalates.

The town called in the provincial police, the Surete de Quebec (SQ) telling them to remove the barricades-with force if necessary- while at the same time the Warriors vowing to defend their land to the death.  Both the provincial government and federal government have been calling for calm on all sides.

At this point other First Nations act in sympathy and begin to erect symbolic barricades on their lands in areas across the country. The issue gains national and international media attention.

Also in sympathy, a reserve just to the south of Montreal would soon occupy and block an important bridge causing extreme frustration for thousands of residents in Montreal and the south shore who used the Mercier Bridge daily.

With two Quebec injunctions ordering the Pines barricade be dismantled, the SQ decide they will act in spite of warnings by informers that a group of Mohawk are armed and that any intervention will both provoke a strong reaction from the militants and also increase support in the Mohawk community for the militant group.

In spite of this in the the early morning of July 11, without advising the provincial Premier or the Minister of Security, the SQ tactical squad launched an ill-planned raid to dismantle the barricades and disarm the Mohawk.

In the confusion shooting began with tear gas and  and as bullets whizzed by both sides, a police officer fell, mortally wounded

The botched raid left several SQ vehicles abandoned which were later used to build up the blockade on the highway through the area, Route 344.

Lemay dies in hospital later. The crisis and blockade continues and on August 20 the provincial government asked the army to intervene after weeks of talks fail to resolve the issue.

The tense standoff continues with media from around the world following the story. 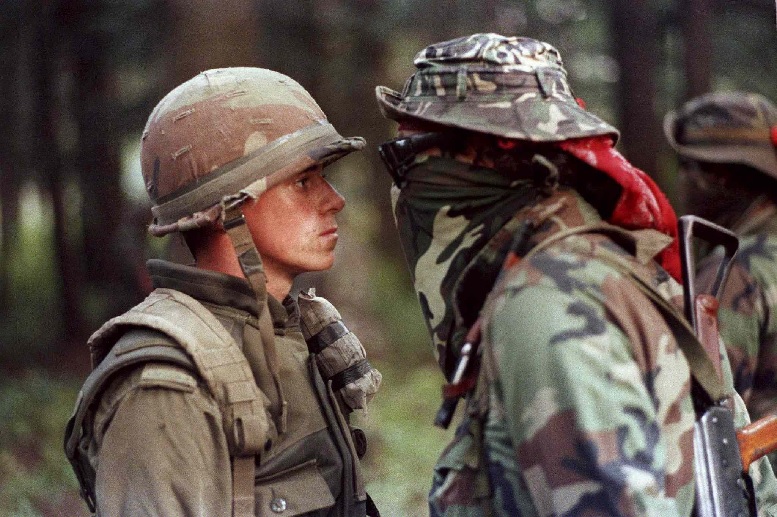 One of the most iconic photos of the months long standoff shows then 21-year-old steadfast Cpl Patrick Cloutier being taunted by Saskatchewan Ojibwa Brad Laroque, This came after the army was called in after the failed SQ raid. (Shaney Komulainen/Canadian Press

Fearing the large army presence, many of the Mohawk leave with only a relatively small group remaining. 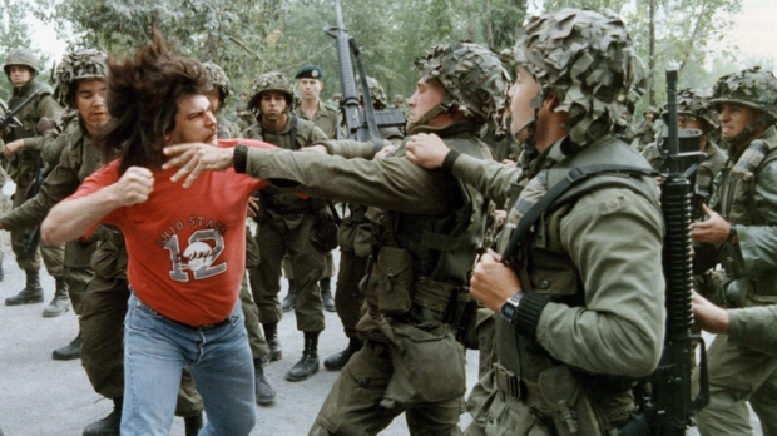 As the army moves in during September, dozens of militant Mohawk get involved in a melee with soldiers, Many people on both sides suffered minor injuries and several Mohawk were detained. (Tom Hanon-CP)

In mid-Sept, army raids seize a number of Mohawk weapons.

On September 26 the militants decide to disengage and a very confused general surrender occurs.

Two of the several Mohawk arrested will later be charged with  a variety of offences and sentenced to less than two years in jail. Charges against other Mohawk are withdrawn.

In spite of a number of conspiracy theories, a coroner later determined that Lemay had been shot by a bullet fired from the Mohawk positions, although the shooter was never determined.

In 2015 the new mayor of Oka and Grand Chief Serge Simon sign an agreement that no development will ever occur in the Pines that will threaten the peace.

The actual ownership of the land however remains unresolved.