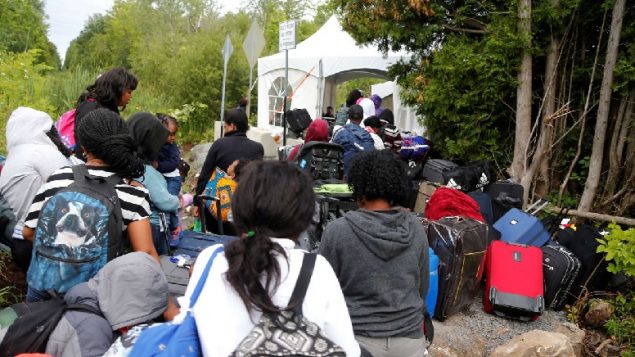 Migrants wait for initial processing at the well-known "irregular" crossing point from the U.S into Canada, August 2017 (Reuters- Christinne Muschi)

(public comments open on all RCI stories – scroll to bottom: comments will be posted after moderating)

Migrants crossing illegally into Canada from the U.S to claim asylum increased dramatically last month. Figures show that after two months of a decline in such numbers, there was a sudden jump of 23 per cent of crossing and asylum claims in July.

It is illegal to enter Canada at any point other than an official border point, or port of entry.  The Liberal government has however chosen the word “irregular” to classify those entering Canada outside of such official points

Most of the 1,634 people who have filed asylum claims crossed illegally into Canada at a well-known point at the Quebec from the U.S state of New York. 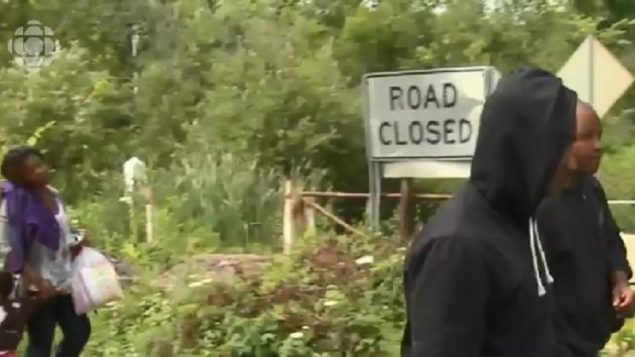 Migrants arrive by taxi at the known crossing point in Quebec in August 2017. After a decline in numbers in May and June of this year, asylum claims increased in July (Radio-Canada)

There was a high point of over 2,500 illegal entries into Canada in April, but then a decline to just over 1,800 in April, and over 1,200 in June, before the increase last month.

The Liberal government attributed the declines to their efforts to discourage asylum claimants, but has said this July spike was not unexpected as the same thing happened in 2017.

Conservative immigration critic Michelle Rempel, quoted in the Canadian Press said, “This is just reconfirmation that the government has made this a new and permanent stream of entry into the country. They owe it to the Canadian public to say how much this is going to cost”.

However, the newly appointed federal minister for border security, Bill Blair, says the situation is not a crisis 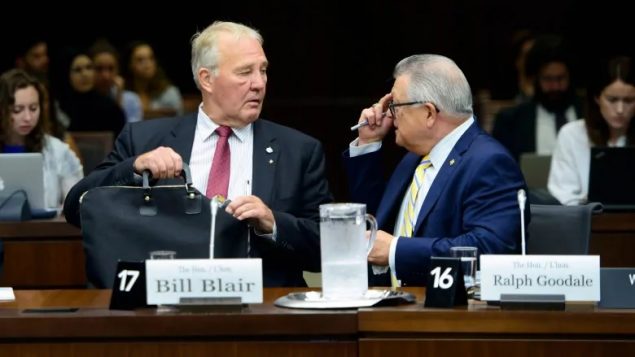 Public Safety and Emergency Preparedness Minister Ralph Goodale and Minister of Border Security and Organized Crime Reduction Bill Blair (left) appear as witnesses at a House of Commons standing committee on immigration in Ottawa on Tuesday, July 24, 2018. Th Liberal government says the thousands of asylum claimants crossing illegally into Canada is not a “crisis”. A recent national poll shows most citizens think it is. (Sean Kilpatrick/Canadian Press)

The Liberal government has said it has set aside funds of $173 million to deal with improved border security, create temporary housing, and deal with the increasing backlog of asylum claims.

To date, there have been over 12,000 asylum claims made by migrants crossing illegally into Canada.