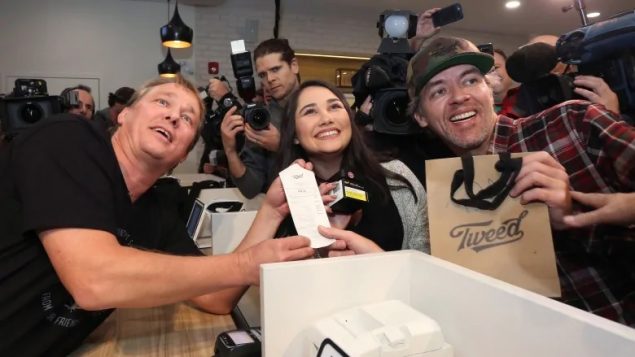 Canopy Growth CEO Bruce Linton, left to right, poses with the receipt for the first legal cannabis for recreation use sold in Canada to Nikki Rose and Ian Power at the Tweed shop in downtown St. John's N.L. at 12:01 am NDT on Wednesday. (Paul Daly/Canadian Press

The first day of legalised recreational use of cannabis in Canada has dawned, starting as of 12:01 AM this morning.

Crowds lined up at a cannabis outlet in St John’s Newfoundland just past midnight to be the first in the country to buy cannabis legally. 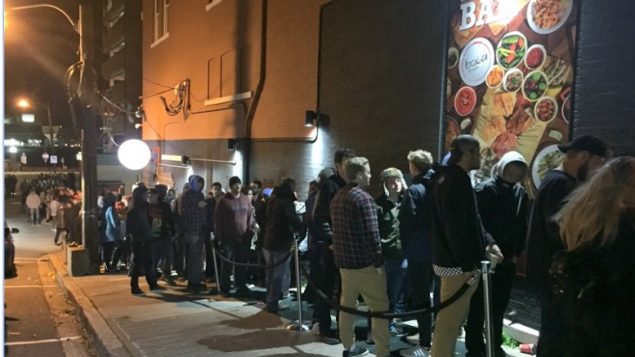 There were line-ups outside a couple of outlets in St Johns Newfoundland waiting for the 12:01 AM deadline, the first time zone in Canada whereupon pot becomes legal. ( Zach Goudie- CBC- twitter)

As the day begins to roll across the various time zones in Canada, other groups are also lining up to purchase the product.

While Uruguay has legalised cannabis, and a recent judgement in South Africa makes growing and consuming legal in people’s homes, Holland has legalisation with restrictions, Portugal has decriminalised drug use, and some U.S states have individually legalised cannabis use, Canada is the first G7 country to legalise pot.

In June, months before the legalisation of today, Russia and the United Nations International Narcotics Control Board (INCB) both criticised the coming Canadian decision saying it runs counter to Canada’s international legal obligations. Quoted in Business Vancouver, INCB President Viroj Sumyai expressed concerns about public health implications and concurred with Russia about international obligations concerned with narcotics and added, “We also call upon the Government of Canada to consider the repercussions of its policy on other Member States” 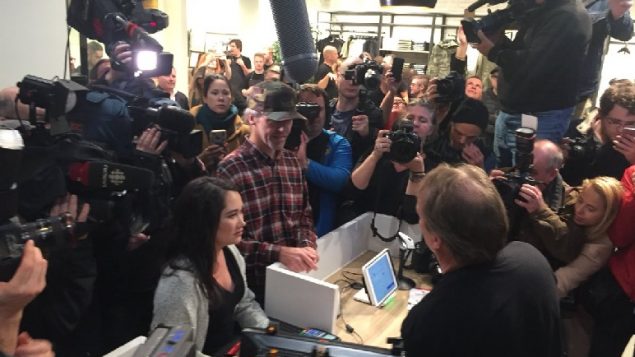 The media frenzy, both domestic and international at the first sale of legal marijuana at a store in St John’s Newfoundland (Zach Goudie- CBC twitter)

In Germany, Deutsche Welle noted the occasion with the interesting headline on its German language site (translated) “Oh Shit- You can now get stoned legally in Canada”. It’s English language title was more subdued noting simply sale has become legal, but adding that health officials are concerned about this “uncontrolled experiment”.

France 24 TV also noted the occasion saying a century of prohibition has come to an end while the daily Le Dauphine reported that 16 per cent of Canadians had smoked put this year and asked wryly legalisation meant pot was going to replace maple syrup noting that Canada is a country where cannabis use has increased dramatically in recent years. 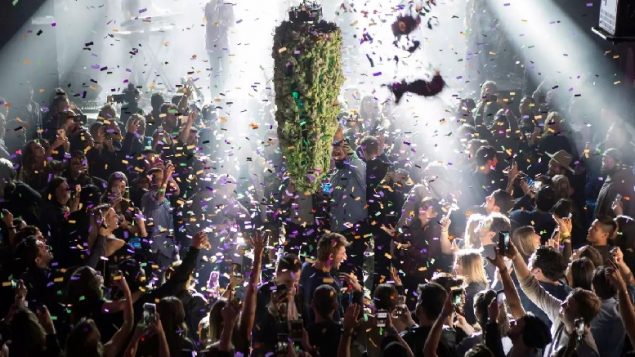 A late night party in Toronto to celebrate the end of “prohibition”. At midnight Toronto time, a simulated giant “bud” was lowered from the ceiling (Chris Young- Canadian Press)

The BBC reported on the occasion as well, noting concerns about police readiness to deal with drug impaired driving and that although legal, there is a patchwork of differing provincial and municipal regulations about possession and use across the country.

In Spain, El Pais covered it with the headline, Canada refines details a few days before legalisation, but also notes the many differing regulations across Canada.

The Japan News covered he story today as well but focused mostly on financial aspects of creation of licensed growers, mergers and acquisitions of cannabis related operations, growth potential, and effect on the country’s gross domestic product.

Whether concerned about implications, or pleased with the new laws, many Canadians and organisations are wondering how the legalisation will work out in coming months and years.