A new poll shows not all provinces like each other, and some feel they are being treated unfairly within Confederation while others are taking ,are than they're giving. (CBC)

Canada a confederation not quite so unified

It’s a huge country, second biggest in the world, with 10 provinces, 3 territories, and apparently, not all that unified.

A new national survey by the Angus Reid Institute polling firm shows some regions are not all that kindly disposed towards others. This stems from a general perception of the people in other provinces, but also because of Canada’s “equalisation” payments, whereby tax payments to the federal government are redistributed to the provinces based on their ability to generate tax revenues.  That is, if the economy is not doing well in a province, it will get more money back in order to help ensure the province can provide the same level of services as provinces doing well.

While the three prairie provinces, Manitoba, Saskatchewan, and Alberta, have a relatively good opinion of each other, they don’t have a particularly high opinion of west coast British Columbia. This is probably due to the current conflict over an oil pipeline from Alberta to the Pacific coast. 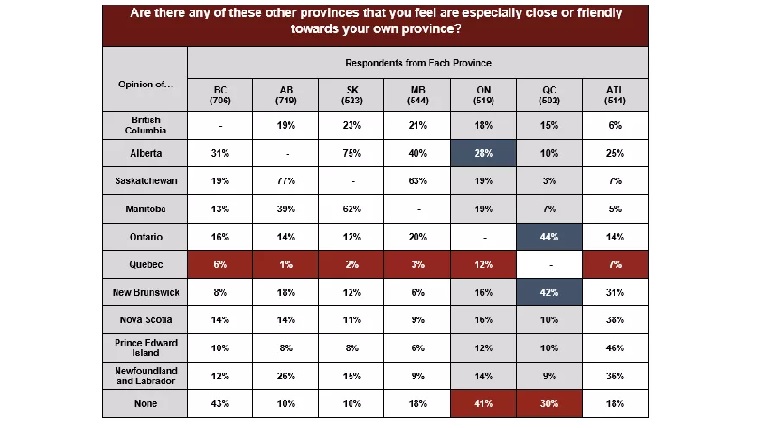 How Canadian provinces feel about each other. (Angus Reid Inst-2019)

While about 30 per cent of B.C residents say they have a close relationship with neighbouring Alberta, just over 4 in ten (43%) say the province doesn’t really have any particularly close relationships with the other provinces.

On the other hand four in ten in the three prairie provinces say they are not treated particulary well by Ontario and about 75 per cent say the same of mostly French-speaking Quebec.

Some 44 per cent of Quebec residents consider neighbouring Ontario as a friend, but only 12 per cent of Ontario residents feel the same about Quebec.

Just over 42 per cent of Quebeckers also view officially bilingual New Brunswick as  friendly, but three in ten Quebeckers think that no other province is particularly kind to them. That is also not reciprocated though as only 13 per cent of N.B. residents feel the same way about Quebec. 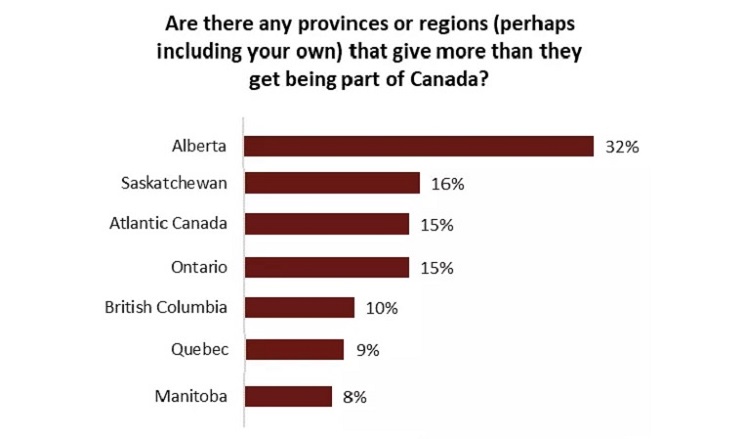 As to who gets more than they give, half of the respondents named Quebec as getting more than it gives, while Alberta residents themselves consider their province is the one that gives the most and gets the least in return.

The eastern maritime provinces tend to like each other but are also are seen by some other provinces as getting more than they give, although to a lesser extent than Quebec.

What this shows is a country that although certainly not on the brink of division, does have some lingering and underlying differences that might attract the attention of the federal government, especially in this election year.