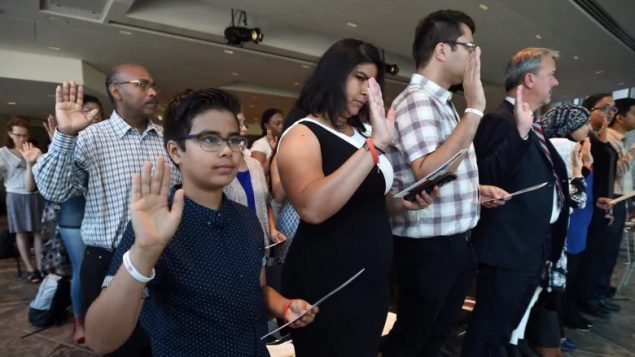 A group of new Canadians takes the citizenship oath during a ceremony at the National Arts Centre in Ottawa Sept. 2017 month. A survey looks at international perceptions of who is accepted as equal citizens by others. (Sean Kilpatrick/Canadian Press)

International survey on nationality: Who is “accepted”

Does someone “belong” to your country, or not?  It seems there are about six categories of opinion according to the international polling agency Ipsos.

A second survey just released by the Canadian polling firm Angus Reid also weighs in on the issue, but with the nuance about birth tourism and who should be granted citizenship.

The Ipsos survey contacted 19,000 male and female adults in 25 countries for their opinion on whom they consider to be “nationals” or equal citizens of their country. The survey was conducted during April and May of last year.

After analysing result Ipsos classified the opinions into six categories. 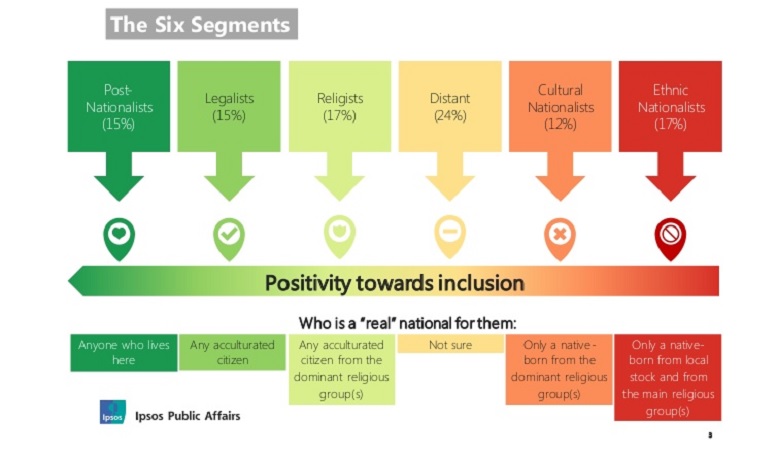 Ipsos divided respondents into 6 categories which also had a certain tendency to be along the political left-right spectrum. (Ipsos)

Some 15 per cent of respondents fell into the “post-national” definition.  This group seems willing to accept anyone as an equal citizen regardless of their legal status or other conditions.  This post national segment tends strongly to the left on the political segment, tends to be young and educated.  This group is most common in  Canada, the U.S., Australia, Chile, Spain, Sweden and the U.K

The third division with slightly higher numbers at 17 per cent, are “Religists”.  For them nationality extends to those born in their country regardless of parents origin, as well as to those naturalized, fluent in local language and employed, but,with the proviso they belong to the dominant religious group and don’t have extreme political views.

Fourth are called “distant” (24%) who prefer not to express their views. Most common in Japan, Saudi Arabia, South Korea, Malaysia, Turkey, Brazil and the U.K. 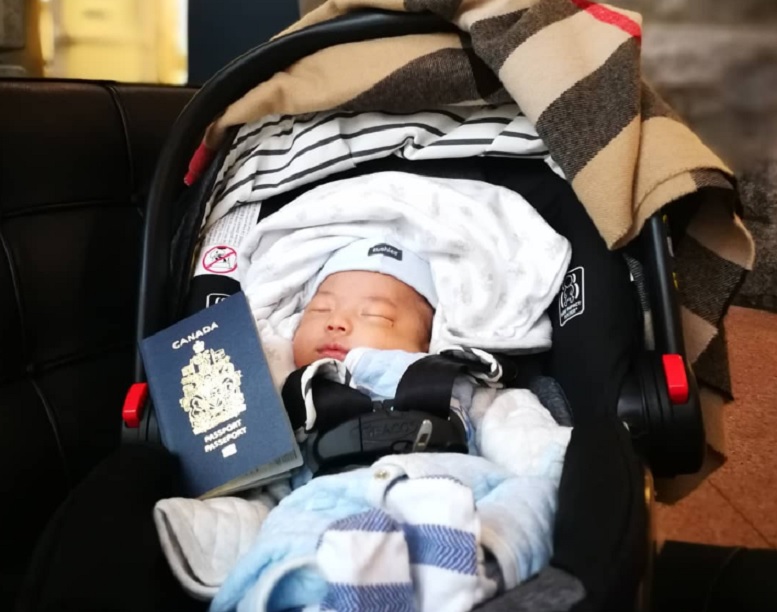 The issue of birth tourism where a baby born here is automatically a Canadian. The issue seems to be a slowly growing concern in Canada. This photo of a Chinese baby holding a Canadian passport was posted by Baoma Inn, of Richmond B.C., one of several so-called birth houses or maternity hotels designed to enable women to have their babies here while ostensibly coming as tourists. New research shows the number of such “passport baby” births is at least five times higher than thought. (via CBC)

Fifth are “cultural nationalists” (12%). Here they accept those born in the country regardless of parent’s origin,  but often exclude those not of the dominant religion, and also exclude immigrants even naturalized citizens and even if fluent in the local language.

The final category are listed as “ethnic nationalists” (17%). This group considers nationality limited to those born in the country from local lineage and of the dominant religion. Excluded are immigrants, minority religions,  criminal history, extreme political views, and often members of lesbian or gay communities

The Canadian survey by Angus Reid, explores a somewhat similar subject of who should be granted citizenship. Now in Canada any child born on Canadian soil is automatically granted citizenship. This has become an issue due to the phenomenon of “birth tourism” where pregnant women arrive in Canada simply to have the child born here and thus gain citizenship and access at any time thereafter to Canada’s social advantages.

The poll showed that most Canadian are now not in favour of all inclusive citizenship.  Two thirds of Canadians asked say a child born here to parents on tourist visas should not be granted citizenship, while 60 per cent say changes to the citizenship laws are needed to discourage birth tourism