Once again Chinese researchers are being condemned for an experiment involving genomics. The controversy comes from an effort to insert a human brain gene into eleven monkey embroyos. The  five surviving monkeys did not have bigger brains but their brains did develop more slowly along the lines of human brain development, and are said to be slightly better with short term memory.

The Chinese experiments have not ended in spite of international criticism.

Chinese genetics researchers have already come under fire for creating two babies whose genes were modified such that they will be immune to HIV. Critics say this has the possibility of permanently changing the human genome. In this latest experiment involving adding a human brain gene to monkey brains the Chinese researcher says his work is to study human brain evolution.

The research was published in the National Science Review

A number of researchers in other countries have said such experiments are not ethical. In a 2010 paper on the subject entitled The Ethics of Using Transgenic Non-Human Primates to Study What Makes Us Human, University of Colorado scientists wrote that such experiments are “ethically unacceptable”. They also note that single genes can have multiple functions and a hypothesized outcome could just as easily have a “wide array of unexpected and/or deleterious effects”. It adds that even if the result is as hoped, that too would “raise further ethical questions concerning the animal’s vulnerability to harm”. University of North Carolina computer scientist Martin Styner, an expert in medical image analysis was involved with the Chinese process only in terms on analysing the MRI data. He now says  “When we do experiments, we have to have a good understanding of what we are trying to learn, to help society, and that is not the case here.”  He told PostMedia  “So, yes, it’s morally risky to move towards humanizing primates, particularly when we are talking about the brain,”

Also quoted by PostMedia is Letitia Meynell, an associate professor in the department of philosophy at Dalhousie University in Halifax.She said, “I certainly would have thought you would have had to have a reasonable expectation of high benefit to human beings to justify the harms that you are going to have for intensely social, cognitively complex, emotional animals like monkeys. It’s not clear that this kind of research has any reasonable expectation of having any useful application for human beings”. 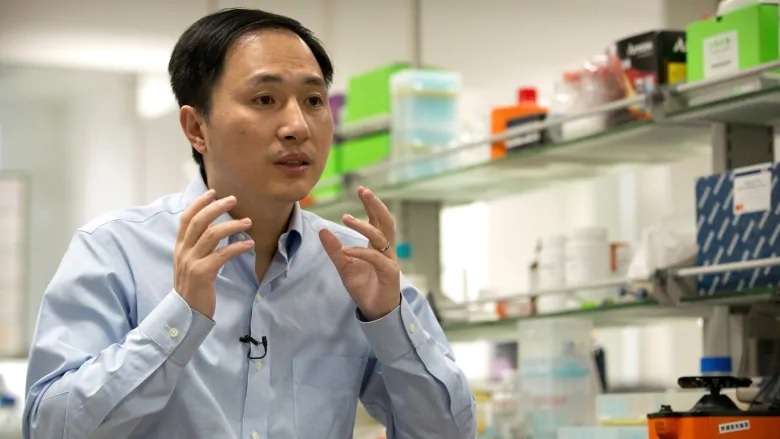 He Jiankui speaks at a laboratory in Shenzhen in southern China’s Guangdong province he claimed that he helped make the world’s first genetically edited babies, twin girls for which he has been widely criticised by other scientists and ethicists. (Mark Schiefelbein/Associated Press)

Geneticist Bing Su, of the Kunming Institute of Zoology at the Chinese Academy of Sciences, says he intends to continue with such experiments using other human genes such as FOXP2, thought to be connected with language development and SRGAP2C – a DNA variant which goes back millions of years and has been dubbed the  “humanity switch” and  the “missing genetic link”  thought to be tied to the development of human intelligence.