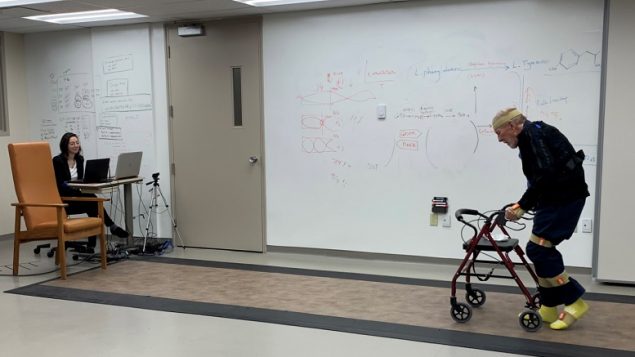 Guy Alden used to rely on this wheelchair device to walk and a mobility scooter to get around but now walks unaided. The photo shows him walking on a gait mat with special sensors used in the research project. This is how they record the participant’s movement and track their progress over time. Shortly after the treatment he was able to vacation with his wife in Hawaii, walking unaided (Lawson Research Institute)

Parkinson’s Disease is a degenerative brain disease, and one of the effects is hindering movement such as the ability to walk around. This could range from a shuffling gate, to a condition known as FOG, of “freeze of gait” meaning while walking people’s legs simply stop moving and they can fall over.

Dr Mandar Jog (MD, FRCPC) is a professor in the Department of Clinical Neurological Sciences at Schulich School of Medicine & Dentistry, at Western University and director of a National Centre of Excellence-Parkinson’s Disease.at the Lawson Health Research Institute, both institutions are located in London Ontario.

Dr. Jog notes  there are several treatments to reduce the symptoms of Parkinson’s including drugs to spur the body’s production of dopamine and for a small number of patients, even electrodes planted in the brain.  He says some patients respond well to such “traditional” treatment but many do not. 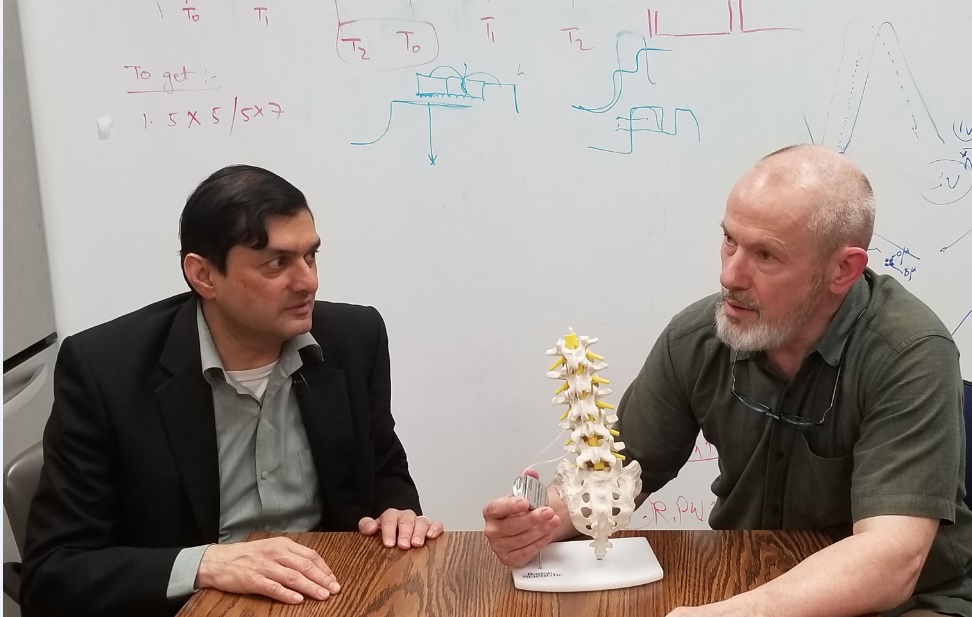 Dr. Andrew Parrent (R) Neurosurgeon at London Health Sciences Centre, collaborates with Dr. Mandar Jog (L) on this research and implants the devices into the research participant’s spinal cord. “A wire is threaded in the dorsal area of the spine and attached to the stimulator implanted in the body.” (Lawson Research Inst)

Based on previous animal and other research, Dr Jog and team have spearheaded new research trials in which electrodes were implanted on the spine of several patients. Small electrical impulses are generated to stimulate signals between the legs and brain. 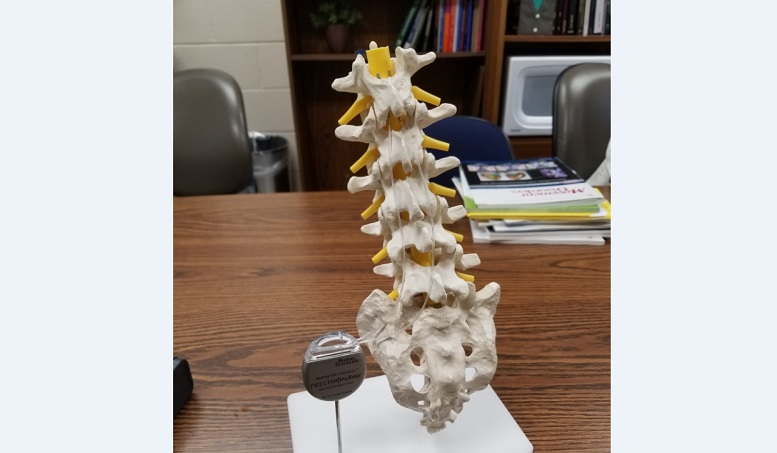 A new trial implants electrodes on the spine stimulated by a heart pacemaker. Initial trials show even after 1-3 years, patients are showing greatly improved mobility. Note electrodes at top of spine model and pacemaker at lower left. (Lawson Research Institute) 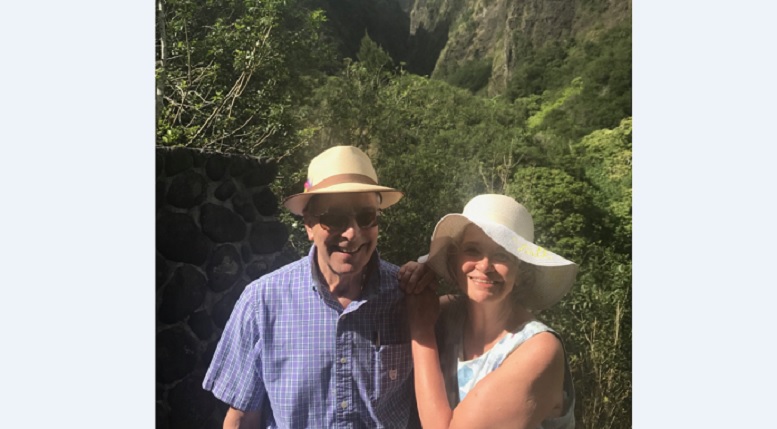 Mr Alden has made such progress that he and his wife were able to vacation in Hawaii where he was able to get around unaided by a walker or other device. (supplied)

The first of several patients in these unique trials have reported great improvements in their mobility. Formerly wheelchair-bound patients have been able to walk and one even went on vacation. For others simply eliminating the danger of falling has been of great relief.

Patient Gail had difficulty and was fearful of walking as her legs would often freeze and she would fall. Two months after the procedure she was walking with confidence. Brain scans before and after showed some regeneration of dead parts of the brain connected with mobility (Lawson Research Institute)

Dr Jog points out this new research is in its early stages, and it’s not a cure, however improving the quality of life for the patients is a huge benefit for them.

His team is continuing the trials with an additional group of patients and hopes that other researchers elsewhere will also begin trials towards establishment of a greater database of results and prove the hypothesis of this electro-stimulation.