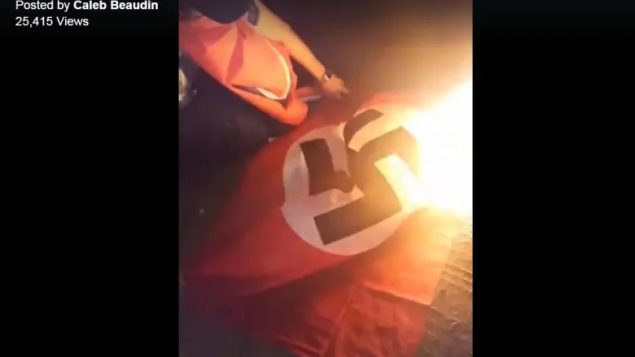 A Facebook video appears to show the burning of a Nazi flag that had been raised last week by a resident of the village of Kelliher, Sask. (Caleb Beaudin/Facebook)

There is a universally despised symbol, that of the Nazi “hakenkreuz”  a twisted swastika, while in recent years the Confederate flag of the U.S has also fallen into disfavour over the segregation and history it represents.

Thus, it was an unpleasant surprise for townspeople to see both these flags flying above a house in the a quiet hamlet about 140 kilometres northeast of Regina, Saskatchewan.

On Thursday last week, a resident in the village of Kelliher tied a Nazi flag and a Confederate flag about half way up the tv antennae tower attached to his house.

The local mayor said he had quickly received complaints about the flags, noting that a 34-year-old resident in the house was a man who “never grew up” and was living there with his grandfather.

The mayor called the man’s parents who were unaware of the situation and they promised it would be taken down.

Police said the flags are not illegal, but do cause a disturbance, however a university law professor noted that if publicly displayed they could be classed as hate speech.

The police went to the house and spoke to the resident who said the flags would come down after it stopped raining as the aluminium rungs of the antenna tower were too slippery to climb. Police believed the matter was in the process of being resolved.

Then on Saturday, a Facebook video was posted by an indigenous man, showing what appeared to be the same Nazi flag being burned while his face was obscured by a Confederate flag, presumably also from the house.

The man said he acted because the police didn’t and that the flags showed racism. He noted that a number of Indigenous children attend the school nearby and took the flags down “for them and for us, First Nations people”, and added he was not afraid of being charged as so many people will support the action.

Police say they will meet with the occupant of the house to discuss the situation further.