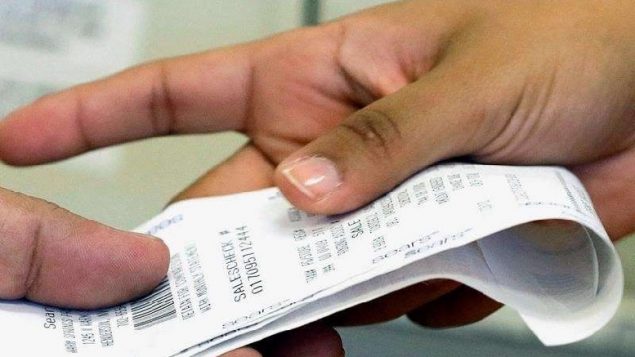 A cashier hands a customer his change and receipt during a purchase transaction at a store, in Henderson, Nev. on Aug. 29, 2014. Some of Canada's biggest retailers say they've started testing alternatives to receipt paper that's coated in potentially dangerous chemicals as pressure mounts for them to phase it out by the end of this year. A conglomerate of health, labour and environmental groups sent a letter to 13 retailers, including major grocers and fast-food chains, asking them to take immediate steps toward eliminating their use of bisphenol-coated receipts and other paper products in the country. THE CANADIAN PRESS/AP, Julie Jacobson,

Millions of people every day handle a known toxic chemical and most don’t realize it.

The majority of today’s cash registers in stores use thermal paper for its cash register receipts. This type of receipt paper has usually been coated with bisphenol-A (BPA) which has been banned in baby bottles in Canada since 2010 as a hormone disruptor and potentially harmful to babies whose bodies are still in early development. It was not banned on thermal cash register paper or other food or beverage products..

Still, the government noted the chemical “constitutes or may constitute a danger to human health and the environment”. The chemical can be absorbed into the body through the skin as you handle the receipts.

In light of growing public concern, some companies switched from BPA to BPS on the receipts. Howeve, that is a nearly identical chemical.

A concerted campaign last month by a group including Environmental Defence, the United Food and Commercial Workers Canada, and Breast Cancer Action Quebec said the receipts constitute a health threat. In a letter to 13 major retailers, the group said the chemicals,”damage fertility, harm the fetus, and cause adverse health outcomes including cancers of the breast and prostate, diabetes, and attention deficit hyperactivity disorder (ADHD) in children”.

The group took the action to push retailers as they feel the government has been slow to legislate.  Health Canada says levels found in adults are low and do not pose a health risk.

The environmental and health group, including the labour union, United Food and Commercial Workers Canada disagrees.  They say, “The notion that … by doing one’s job that one is being exposed to these toxins would quite naturally concern us”.

Some of the companies targeted in the campaign to stop using the chemical-coated receipts said they no longer use BPA, and comply with all regulations.  Several did not say what they use as a replacement, while others say they are in the process of exploring alternatives to the bisphenol chemicals.

In response to the campaign Costco Canada, a major big box retailer, has just announced it will phase out BPA and BPS by the end of the year.

Other countries have raised concerns about the chemical’s use but Switzerland is the only country so far to ban BPA and BPS from use in thermal paper.