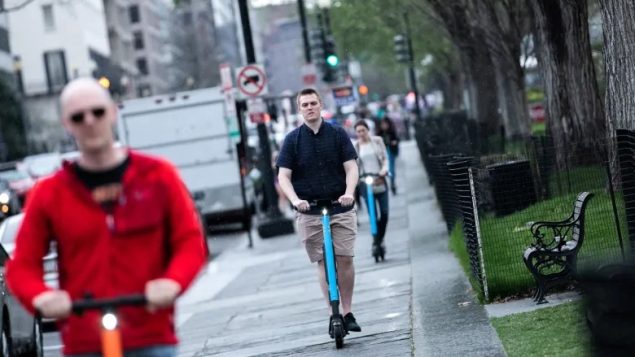 Washington has a deal with several commercial e-scooter companies, as do many cities around the world. Canada has been less enthusiastic about the popular devices, especially Toronto (Jeannie Moon-Reuters)

Toronto puts the brakes on e-scooters

They’re called “micro-mobility devices”, but are more commonly known as e-scooters and have become very popular in cities around the world.

But, they are not without their problems, mainly the issue of them being left blocking sidewalks. In other cities, the “dockless” scooters, (meaning they don’t have designated docking areas) are being left randomly around the city and very often carelessly tossed across sidewalks. 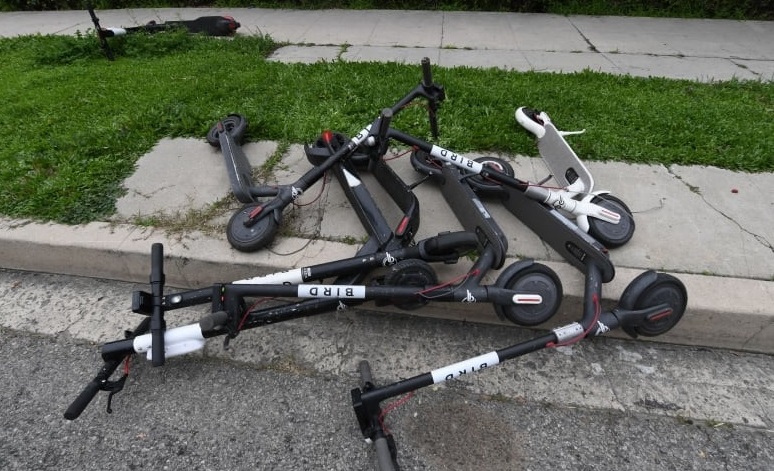 Canada’s biggest city, Toronto, has been a holdout, even after the Ontario provincial government is on the verge of approving them as a 6-year pilot project and allow them on provincial roads where bicycles are allowed. The proposal to be released tomorrow likely includes a regulation that riders be at least 16 years old, and the speed limited to 32 km/h.

Toronto just recently allowed a short-term pilot scooter project during the hugely popular Toronto International Film Fest, but the scooters can only operate within a small section of the city’s “distillery district” the popular arts and culture area.

Putting the brakes on e-scooters

However, on Monday this week the Toronto Infrastructure and Environment Committee recently recommended a city-wide ban, at least temporarily,  against the devices on city property.

Quoted by Global News, Toronto Mayor John Tory said, ““We’re going to preserve the status quo the best we can and not have kind of a wild west where people just show up in town and start operating the scooters without rules and start leaving them all over the place without rules”.

Bird Canada which seeks to launch in the city said they were surprised by the recommendation saying Toronto being one of the last major cities in the world to allow scooters, could learn what works and what doesn’t from the other cities.

The committee’s recommendation has to be discussed by the city council before taking effect.

How green are they?

Touted as a green alternative to other forms of transportation, a North Carolina University study in August shows they may not be as “green” as portrayed.

While their operation may be green, the overall environmental footprint is not.  That comes from the emissions and energy needed to make them and the footprint of driving vehicles around the city every night to collect, redistribute, and recharge them. Montreal has allowed them, but already vandals are active. “One Lime destroyed, another dumped in the Lachine Canal. Not only do I not care for their visual pollution, but this Lime invasion is not working for me. Am I the only one?
Photos: Facebook St-Henri Group  #Montreal”

A Lime spokesperson criticised the study saying the researchers used a consumer scooter and not a commercial product and didn’t have access to company data thereby making several assumptions.

However, due primarily to vandalism, the lifespan of a scooter also seems to be woefully short, as in a matter of months, or in one study in Louisville, Kentucky a mere 29 days. This means a new scooter has to be built with its inherent environmental footprint to replace the damaged one. 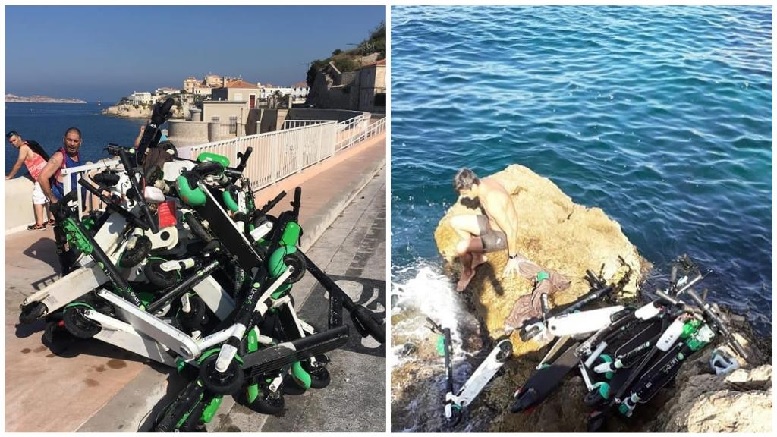 The scooters seem to have a short lifespan. In Europe, divers are constantly recovering the scooters from city rivers, canals, lakes and ocean, In July these were recovered from the ocean at Marseilles (Facebook Alain Painchaud via France 24)

A comment from one company in 2018 said of the 650 they launched in San Francisco, 200 had been destroyed within two weeks. Throughout Europe and the U.S., many are being found tossed into canals waterways and the ocean.