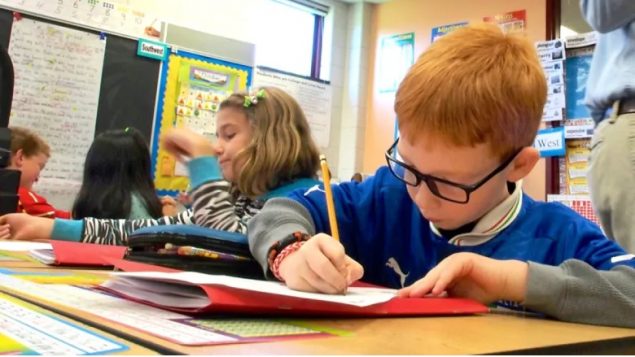 Elementary school students may be young and small generally, but there are more and more incidents of verbal and physical violence against teachers, sometimes causing injury. A new survey found 72 per cent of participants reported explicit verbal insults or obscene gestures from a student, with 41 per cent saying they'd had similar encounters with a parent. (Robert MacPherson/AFP/Getty Images)

It’s getting harder to be a schoolteacher in Canada, and less safe even for school educators of very young students in elementary school.

A new study on the issue of violence against elementary school teachers in Canada’s most populous province, Ontario, compared a survey from last year to the findings of a similar study in 2005.

This latest study the University of Ottawa polled 1,600 educators last year in Ontario and compared their results to those of the earlier survey taken by three major educator unions.

The new study is called  Facing the Facts: The Escalating Crisis of Violence Against Elementary School Educators in Ontario” and asked about the number of times teachers faced verbal or physical violence from students, parents, or administrators during the 2017-18 school year.  (key findings HERE) 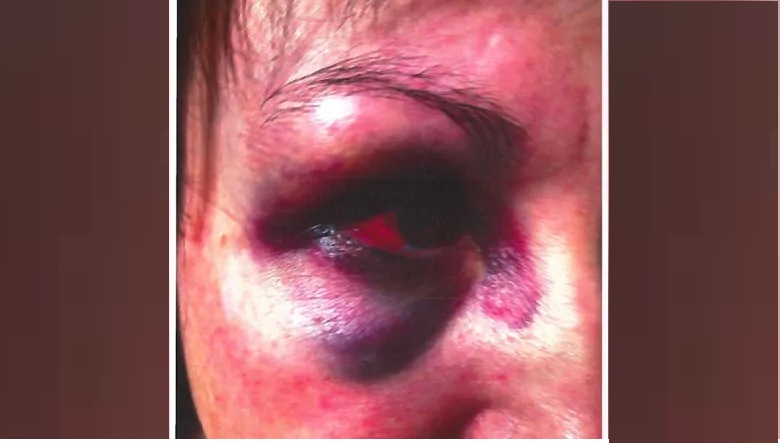 A teachers union, CUPE 2745,in New Brunswick released graphic images detailing injuries suffered by educational assistants as part of a 2017 report tracking incidents over the past 16 months. It’s not just an Ontario issue (Submitted by Simon Ouellette/CUPE)

The 2005 study asked teachers about violence or bullying they had experienced over the course of their careers. At the time only seven per cent reported some form of bullying or physical violence over the years.

The new Ontario survey found a seven fold increase in incidents with 54 per cent of teachers reporting physical violence from students including, kicking, punching, or biting.

Some 72 per cent noted explicit obscene and/or racist insults from students, with 41 per cent saying similar insults had come from parents.

Quoted by PostMedia, Criminology professor and study co-author Chris Bruckert said, “When we talk about this as a crisis, that’s not hyperbole,” Bruckert said in a telephone interview. “There is a serious problem in our elementary schools, and it needs attention.” 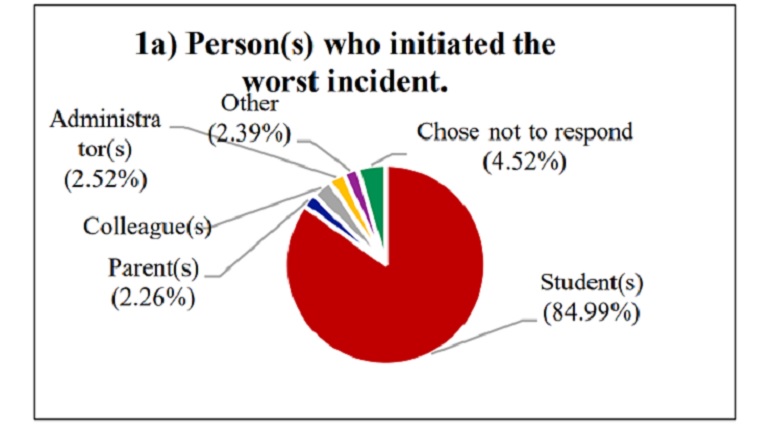 A Globe and Mail survey noted that in Canada’s largest school district, Toronto, there were 3,831 reports of workplace violence last year compared to 1,894 reports to the  2014-15 school year. The Globe reports that in Edmonton Alberta, the rate was more than double just between 2015-16 and last year, while in west coast Surrey, British Columbia the number skyrocketed from 190 incidents in 2008-09 to over 1,600 last year.

The reasons cited are varied and range from societal changes including growing income disparity and inequality, to the addition of children with complex needs into the regular classroom, a claimed lack of support for teachers from administrators, and shortage of resources including trained psychological staff and others.

The report estimates that in Ontario alone, the cost of lost time due to violence is some $3 million annually. 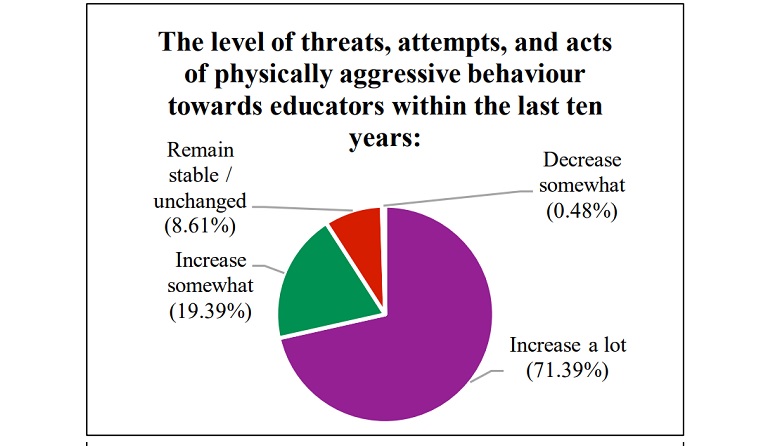 Among the several recommendations in the report are: increased resources for vulnerable and special needs students, and smaller class sizes so teachers can provide more time to individuals.