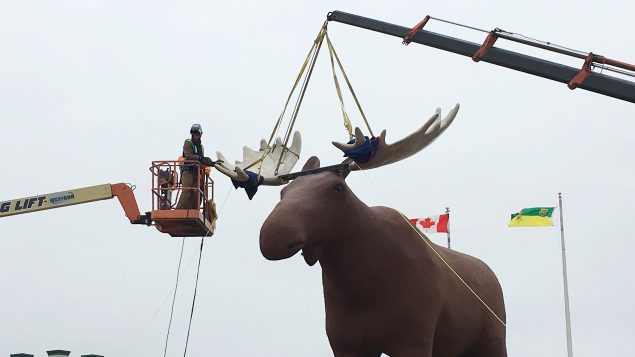 A crew works on hoisting up a new rack of antlers for Moose Jaw, Saskatchewan's "Mac the Moose" on Tuesday, October 8, 2019, officially making him the tallest moose statue in the world after a friendly feud with Norway. (Stephanie Taylor/THE CANADIAN PRESS)

“The World’s Biggest Moose” competition if finally coming to an end after four years of dispute between a Canadian and a Norwegian town.

Mac the Moose from Moose Jaw, Saskatchewan, is getting a new rack this week, making it a few centimetres taller.

But these centimetres are important because now the Canadian statue will be taller than its Norwegian counterpart and will become “The Largest Moose in the world”, again.

“Storelgen” from Bjoraa in the municipality of Stor-Elvdal, was built in 2015. The 10-metre shiny statue was 30 cm taller than the Canadian Mac.

This difference was only brought to light a few months ago following YouTube’s Justin & Greg Show, which triggered a battle between the two cities.

“The shiniest and most attractive moose in the world”

To end this dispute, the mayor of Moose Jaw and deputy mayor of Stor-Elvdal decided to meet earlier this year.

At a “Moose Summit” on March 7 in the Canadian Prairies, Fraser Tolmie and Linda Otnes Henriksen called off their battle over which town has the world’s biggest moose statue.

Mac’s antlers were to be altered–raised actually–to allow him to reclaim his title, thanks to a $25,000 injection of cash from Moosehead Breweries.

In exchange, Storelgen, will “forevermore be known as the shiniest and most attractive moose in the world.” 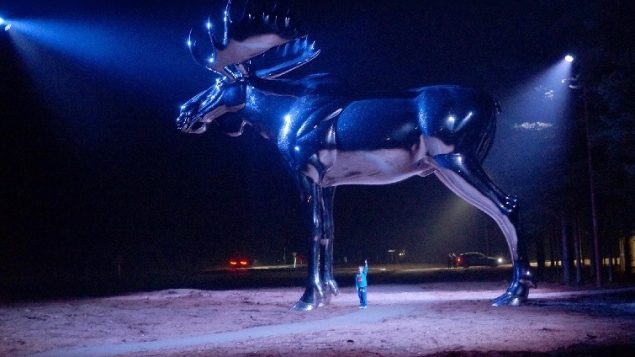 Showing an example of the size, the 10m shiny “Storelgen” in Norway, 30 cm taller than Canada’s moose. (storelgen.no)

As part of the deal, Moose Jaw also agreed to recognize Storelegen as a “pretty awesome-looking moose.”

The two mayors also talked about twinning their towns in search of increased tourism.

Some in Norway are even thinking about writing a children’s book based on Storelgen.

An idea welcomed by both towns.

Without a rack since June, Mac the Moose is now getting a new one with the makeover expected to be finished by October 10.