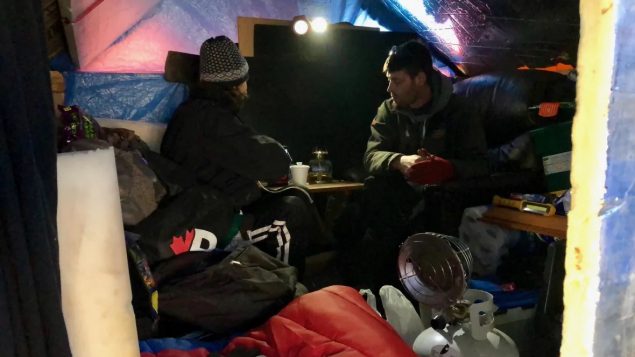 Residents converse inside one of more than half a dozen tents that sat on NCC land behind Bayview LRT station in Ottawa earlier this month. On Tuesday, police cleared the area, 2.5 kilometres from Parliament Hill. (Francis Ferland/CBC)

Police move in to clear a ‘tent city’ in Ottawa

A stand-off between authorities in Ottawa and members of a so-called ‘tent city’ within sight of Parliament Hill’s Peace Tower has apparently ended–at least for the moment.

On Sunday, the National Capital Commission issued a written notice–posted on a tree–telling residents of the encampment near Bayview station, that they faced removal by police if they stayed any longer.

The dozen or so residents were told their belongings would be kept in storage for 15 days and that no one would be left out in the cold. 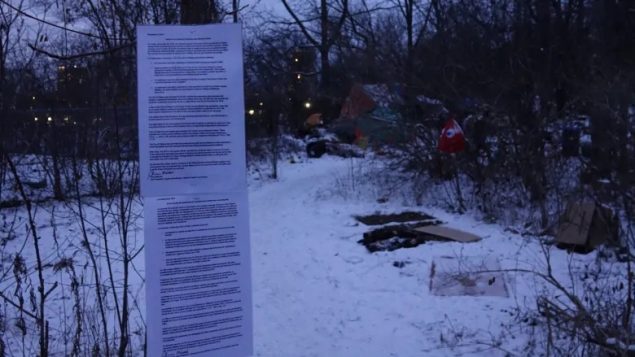 The written statement asking residents to leave also posted on a tree near the encampment on Sunday. (Kimberley Molina/CBC)

The NCC, which oversees federally-owned land in the capital region, says it made the move after residents accepted offers of temporary accommodation from the city of Ottawa, adding that it had asked residents to leave because of growing concerns over their health and safety, including “restricted access to emergency medical services” and increasingly cold weather.

The space was first occupied in the spring after two rooming houses in the area burned down.

About 20 of the residents moved to the nearby wooded area and then spent much of the summer on the streets outside the Somerset West Community Health Centre before returning in the fall to the woods, about 2.5 kilometres from Parliament Hill. 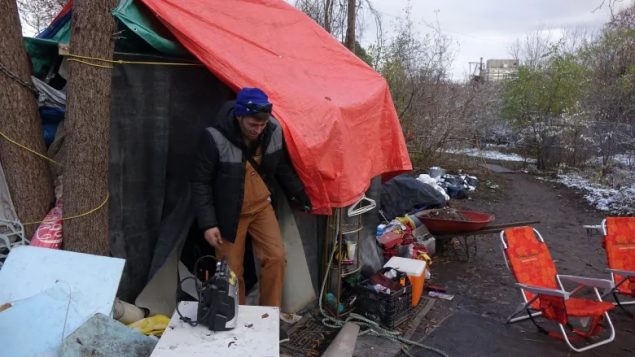 A resident, Justin Bolger, emerges from his tarp-covered tent in the makeshift community near Ottawa’s Bayview transit station earlier this month. (Laura Osman/CBC)

After a fire broke out at one of the tents in November, the NCC and the city of Ottawa issued verbal requests that the residents leave.

On Sunday, the written notice went up.

A study published last week found that one out of every two people who are homeless may have experienced traumatic brain injury.