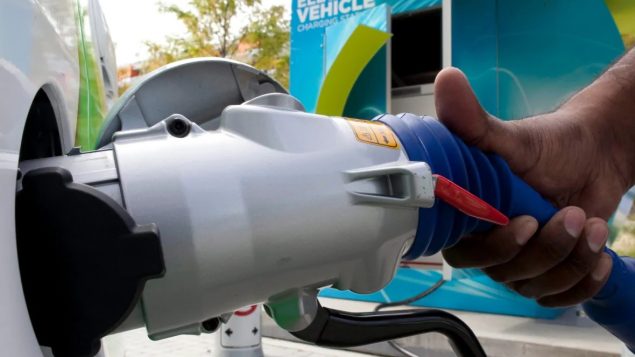 A power cable is attached to an electric vehicle from an electric-vehicle charging station in this photo. Sales of electric vehicles in Ontario have plummeted since the Progressive Conservative government cancelled a rebate last year, hampering progress toward a national target. (Jonathan Hayward/Canadian Press)

To no one’s surprise, sales of electric cars are plummeting in Ontario.

Citing figures from Electric Mobility Canada, the Canadian Press reports that sales in Canada’s largest province fell more than 55 per cent over the first six months of this year from the same period in 2018.

Experts say rebates appear to be the key to the contrasting sales figures.

In July 2018, Doug Ford’s Progressive Conservative government in Ontario cancelled a rebate program that provided up to $14,000 for people who bought electric cars, saying the rebate was going to people who could already afford expensive cars. 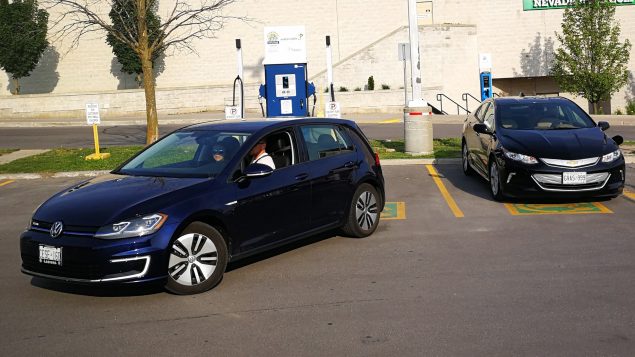 A Chevrolet Volt is plugged into a charging station as a Volkswagen e-Golf backs into an e-charging spot at Lansdowne Mall in Peterborough, Ontario on Sunday June 17, 2018. (Doug Ives/Canadian Press)

This spring’s 2019 federal budget included an incentive of up to $5,000 for electric battery or hydrogen fuel cell vehicles, along with tax breaks for businesses investing in clean cars and trucks.

Experts say rebates help absorb initial sticker shock since the up-front cost of an electric vehicle can run anywhere from $10,000 to $30,000 more than a similar gas-powered car.

British Columbia and Quebec are leading in e-vehicle sales, as both provinces have their own rebates.

Ontario was catching up until the scrapping of the rebate.

It is now the only province not showing an increase in sales.

Electric car sales account for about 3.5 per cent of car sales in Canada, a good distance from the federal government’s target of 10 per cent by 2025.